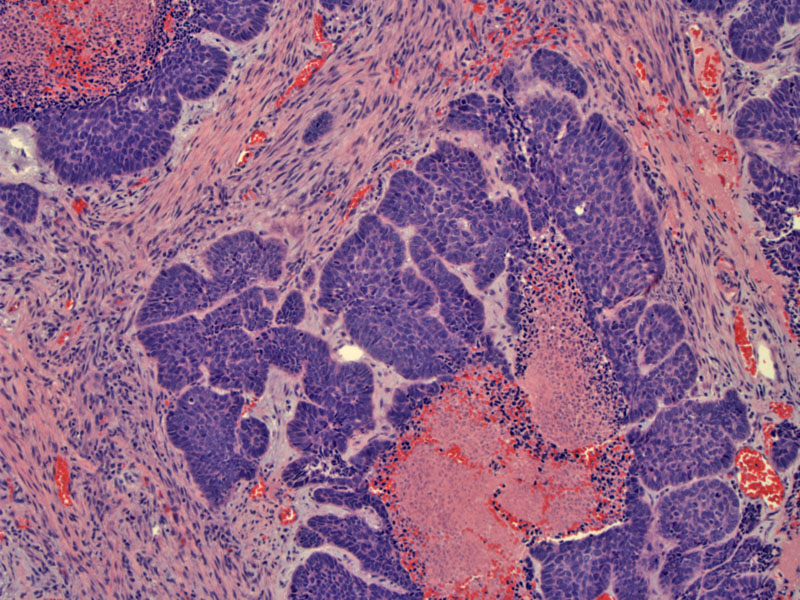 Nests of basaloid cells are set in a desmoplastic stroma with central comedo pattern necrosis.

Strong keratin 5/6 is seen in all basaloid squamous cell carcinomas (Serrano) as illustrated here. In contras,t only a minority of neuroendocrine carcinomas react for this marker, a feature which may be helpful in the differential diagnosis.

As seen in this image, basaloid squamous cell carcinomas consistently display diffuse p63 positivity, with staining of nearly 100% of tumor cells. In the event of potential confusion with adenoid cystic carcinoma (ACC), you can examine the pattern of p63 reactivity, which in ACC shows a consistently compartmentalized pattern within tumor nests (Emanual). In solid nests of ACC, a distinct peripheral staining pattern is seen, while in cribriform areas, a combinations peripheral/internalization pattern is seen. Additionally, the p63-positive cells in ACC are predominantly smaller than the p63-negative cells, and appear to lack nucleoli http://www.ncbi.nlm.nih.gov/pubmed/15529180?itool=EntrezSystem2.PEntrez.Pubmed.Pubmed_ResultsPanel.Pubmed_RVDocSum&ordinalpos=3

TTF-1 is negative (shown), as well as negative reactivity for chromogranin and synaptophysin. These features which may help distinguish this from small cell carcinoma in a small biopsy

Men are most often involved.

In the case of a resectable lesion with no evidence of metastasis, surgery should be the mainstay treatment as it offers a chance for cure. The basaloid component should not be considered a contraindication to surgery. In fact, one study found that the rates of loco-regional control are identical in both groups of patients (75% for the SCC and 74% for the less BSCC).Given the high rate of lymph node metastasis, neck dissection should be performed in all cases even in the absence of clinically or radiologically detectable lymph node enlargement1 .

The tumor typically has a oor prognosis, with rapid tumor growth and a low survival rate, independent of stage and other disease-related characteristics (Soriano). By comparison, those with usual SCC present a higher rate of loco-regional recurrence, while those with BSCC develop a higher rate of distant metastases1 .