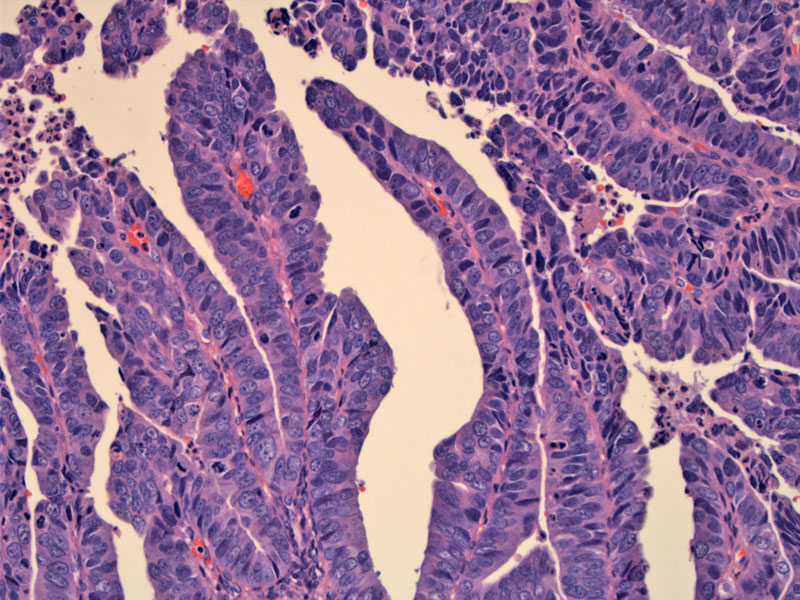 The neoplastic cells are morphologically similar those found in the usual type endometrioid adenocarcinoma, with columnar shapes and ovoid or rounded nuclei.

In this particular case, the tumor was deeply myoinvasive.

Moderate p53 staining was also seen. Note that an IHC panel consisting of ER/PR/p53/p16 can often aid in distinguishing between adenocarcinomas of endocervical or endometrial origin. Typical serous endometrial carcinomas are: p53 diffuse+/p16 diffuse+/ER-/PR-. Typical endometrial endometrioid carcinomas are: p53- or patchy+/p16 patchy+/ER+/PR+ Typical endocervical adenocarcinomas are: p16 diffuse+/p53-/ER-/PR- (Yemelyanova). Thus, the IHC profile for this particular VGA does not perfectly fit into any of the 3 categories. The p53 and p16 staining is more strongly reactive than expected for an endometrioid endometrial carcinoma and resembles that seen in a serous endometrial adenocarcinoma, however, ER positivity is retained which is uncommon in a serous tumor. Either way, I will refrain from further speculation -- this case demonstrates the complex nature of classifying tumors.

Papillary formations often occur in endometrial carcinomas involving the various cells types (endometrioid, clear cell, mucinous, serous). Classifying endometrial tumors containing papillary structures has been fraught with difficulty and furthermore, there are conflicting data on the prognosis of these tumors. Here is our attempt to simply matters.

Some published studies have found improved survival for VGA, especially VGA that occurs in the uterine cervix. Other studies, however, have found a poorer prognosis in VGA of the endometrium (Ambros). This may reflect differences between pathologists on how the definition of VGA is applied. The current consensus is to treat VGA tumor as a variant of endometrioid adenocarcinoma.