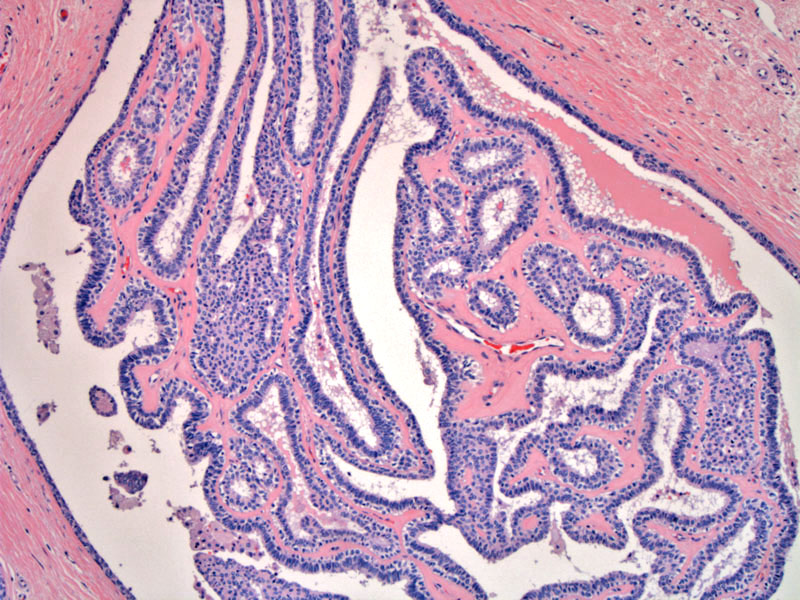 A intraductal papilloma is beautifully demonstrated in this image. The fibrovascular cords are well-developed.

Apocrine metaplasia is present, not uncommon in papillomas.

Other areas contain features of a so-called sclerosing papilloma. Sclerosis from previous injury or ischemia may occasionally lead to entrapment of ductal epithelium and mimic invasion.

Another example of an intraductal papilloma. Note the arborizing architecture and delicate fibrovascular cores.

At medium power, you can distinguish the myoepithelial layer (myoepithelial cells tend to be more rounded with pale/clear cytoplasm).

Intraductal papillomas are generally solitary and located centrally (subareolar). They are most common in women older than 50 and present with serous or bloody nipple discharge. In contrast, muliple papillomas (papillomatosis) tend to arise peripherally and in younger women (Mulligan, Ueng).

Papillomas are characterized by arborizing papillae growing within a dilated duct. The fibrovascular stalks are covered by epithelial cells. Most importantly, an intact myoepithelial layer underlies these epithelial cells. Not uncommonly, there may be changes in the epithelium including apocrine and squamous metaplasia. Epithelial proliferation of the usual type may also occur, leading to a very cellular look (fusion of papillae and formation of secondary lumina).

Sclerosis, possibly due to previous biopsy or ischemic injury, may lead to entrapment of ductal epithelial, mimicking invasive carcinoma. Thus, the lack of cytologic atypia, an intact myoepithelial layer and lack of true desmoplasia should be helpful features of benignity.

Presentationg may include nipple discharge, normal mammographic findings, and a galactographic filling defect.

- Although papillomas are generally regarded as benign, diverse findings in the literature raise the possibility of malignant potential

- There are 2 major variants of papillomas: (1) solitary ductal papilloma , which originates in the large ducts and is centrally beneath the nipple, and (2) multiple intraductal papilloma, which arises in the terminal ducts at the breast periphery