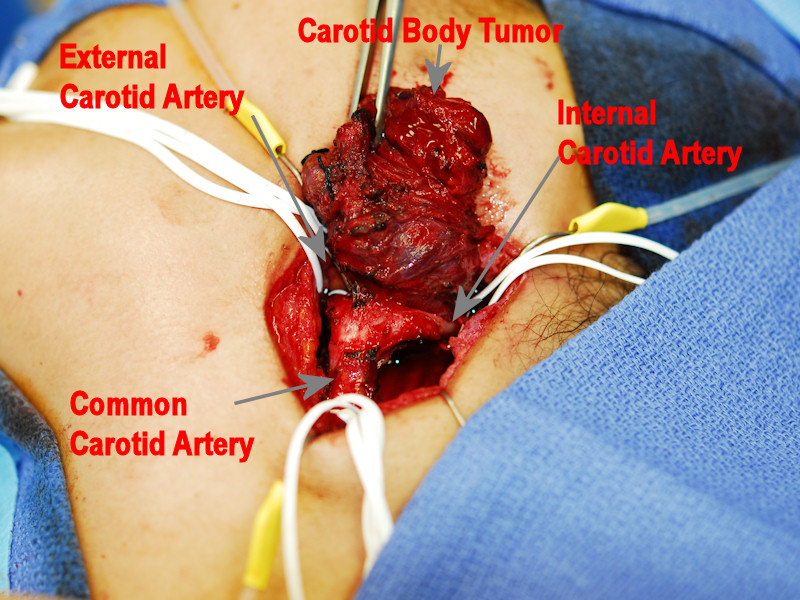 This intraoperative image demonstrates excision of a carotid body tumor. Control of all vessels around the tumor is of paramount importance for safe excision.

Intraoperative photo demonstrating a vagal paraganlioma prior to excision.

The tumor is seen pedicled on the vagus nerve prior to nerve sacrifice and excision.

The Zellballen are separated by sustentacular cells, which are spindled cells at the periphery of the cell clusters.

There are relatively uniform oval to round cells with prominent vasculature; note the hemosiderin in the stroma indicative of prior hemorrhage.

Paraganglia are aggregates of neuroendocrine cells distributed throughout the body. The largest collection of these cells are at the adrenal medulla (which elaborate epinephrine). Paraganglioma is basically a pheochromocytoma of the paraganglia.

In the head and neck, they most commonly occur at the carotid bifurcation, where they are referred to as carotid body tumors (CBT). Other common sites of origin are the vagal nerve or the middle ear, arising from the auricular branch of the vagus nerve, a.k.a glomus jugulare or arising from the tympanic branch of the glossopharyngeal nerve, a.k.a glomus tympanicum (Brandwein).

The carotid body acts as a chemoreceptor and detects changes in the composition of arterial blood (e.g. partial pressure of oxygen). Two types of cells comprise the carotid body: (1) glomus type I cells (a.k.a. chief cells) -- derived from the neural crest, these cells release a variety of neurotransmitters and stain with chromogranin A. They have eosinophilic granular cytoplasm and are arranged in short cords or clusters "Zellballen"; (2) glomus type II cells (a.k.a sustentacular cells) -- resemble glia and act as support cells, staining with S-100. They have pale ovoid nuclei and are located at the periphery of the clusters and cords of chief cells (Fletcher).

Because the carotid body normally functions as a chemoreceptor, carotid body paragangliomas have often been referred to as "chemodectomas".

Grossly, carotid body paragangliomas are typically solitary and unilateral, with an average size of 3.8 cm. The cut surface tan to red, and some may have secondary degenerative changes such as hemorrhage or cystic change. Histologically, the most common architectural pattern is formation of "Zellballen". Alveolar nests of chief cells are surrounded by sustentacular cells and fibrous septae. The stroma can be fibrotic, sclerotic or hemorrhagic. Pleomorphism and nuclear hyperchromasia can be seen and are not indicators of malignancy (Fletcher).

Usually affects adults (peak incidence in the 5th and 6th decade). Clinical presentation is that of a slowly growing mass at the angle of the mandible. Interestingly, there is an increase of carotid body paragangliomas at high altitude (Fletcher). Familial cases may occur as part of multiple endocrine neoplasia II syndrome (Kumar).

These slow growing tumors may be observed in many elderly individuals, with surveillance to assure that no rapid growth occurs. Because some series report up to a 10% malignancy rate, evidence of cervical metastasis should prompt strong consideration of surgery.

Surgery for CBT is routine with embolization reserved for larger lesions. Preoperatively, patients should be screned for metanephrine secretion as this may complicate general anesthetic. Because excision of vagal lesions result in lower cranial nerve deficits, some authors advocate a period of observation for some tumors, especially if the the vagal nerve is functional, until vagal paralysis and resulting self-compensation has occurred. Most patients will need rehabilitation of swallowing and voice after jugular and vagal paraganglioma excision, often requiring vocal fold reinnervation or medialization.

Pleomorphism, mitoses and vascular invasion have not proven to be reliable predictors of behavior (Kumar, Fletcher).

→Paraganglioma is pheochromocytoma of the paraganglia.