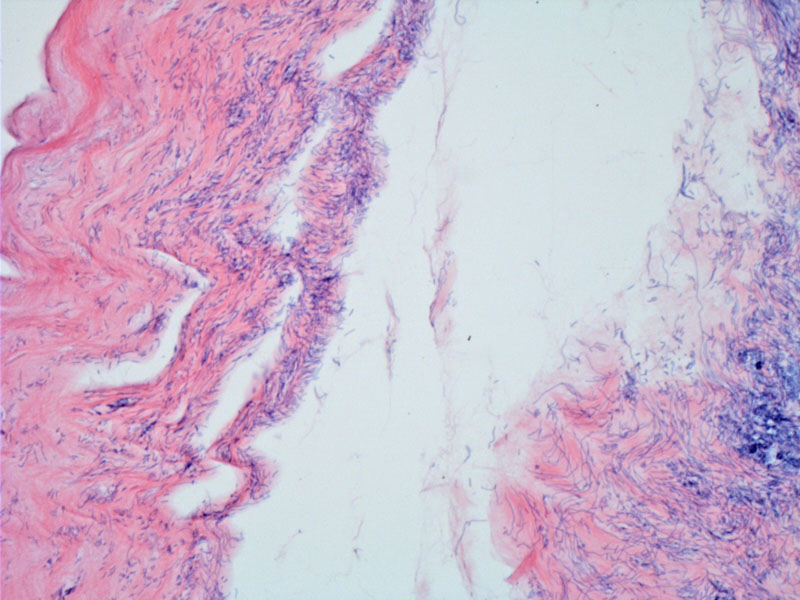 Clusters of filamentous elongated organisms can be appreciated in this placental membrane roll.

A dense purple colony representing a cluster of Fusobacterium in placental membrane is evident.

Arrows point to long, slender and filamentous forms of Fusobacterium.

Fusobacterium necrophorum and fusobacterium nucleatum are pleomorphic, filamentous, gram-negative anaerobic bacteria that are both human and animal pathogens. These bacteria can be found colonizing the oral, GI and GU tracts of healthy individuals. They are often isolated in human dental plaque, and may lead to periodontal disease.

May cause premature labor due to chorioamnionitis. Note that routine Gram stains may not visualize these organisms. Giemsa and Wharthin-Starry stains should be used instead.

In a study of 586 placentae, 14 placentas with chorioamnionitis and fusobacteria-like organisms were identified -- prematurity of the newborns was associated with twelve of those placentae. Perinatal infection with fusobacteria may cause neonatal death from prematurity, rather than from sepsis (Altshuter).