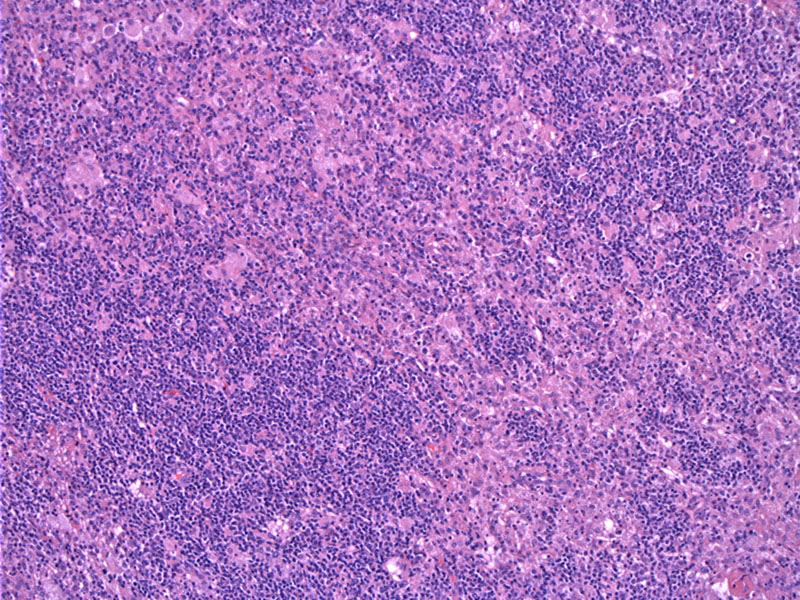 A mixture of lymphoid cells, histiocytes and dentritic cells are seen.
IMAGE DESCRIPTIONS

The histology of KD depends on the age of the lesion and can be divided into three stages:

An area of proliferation (left) admixed with paracortical necrosis (right) is demonstrated here. The degree of necrosis can be quite variable among different patients.

Histiocytes, immunoblasts and lymphocytes form a heterogenous picture. Phagocytized debris is readily seen. Note that neutrophils not a prominent feature in this condition.

Kikuchi-Fujimoto disease is also known as histiocytic necrotizing lymphadenitis. It most commonly affects young Asian women, but can be seen in all ethnicities and both genders.

The cause of KD remains unknown. Autoimmune and/or infectious etiologies have been proposed and associations with EBV, HHV-6 and HHV-8 have been investigated. Definitive data is lacking, however.

The presentation as well as histologic features can raise concern for lymphoma or SLE. In most instances of KD, antinuclear antibodies (ANA) and rheumatoid factor (RF) are negative (Boone).

IHC studies will be helpful in separating out KD from B-cell lymphomas. In KD, B-cell markers will show few scattered B-cells and a predominance of CD4+ T cells in the proliferative stage and CD8+ T cells in the necrotic stage (Weiss). The presence of apoptotic debris and histiocytes will also favor KD versus a B-cell malignancy. In contrast with other acute bacterial disease such as cat-scratch disease, there is a conspicuous lack of neutrophils (O'Malley).

More common in Asians than Western populations. Although initially described in young Asian women, this disease has been reported in all races with an almost equal sex distribution (F:M ratio of 1.25 to 1)(Weiss).

Patients present with cervical lymphadenopathy with is often unilateral and painful. Fever, rash, leukopenia, atypial lymphocytosis may also be present. Hepatosplenomegaly is not uncommon.

Supportive care and in some cases corticosteroids.

Benign and self-limited in most instances.