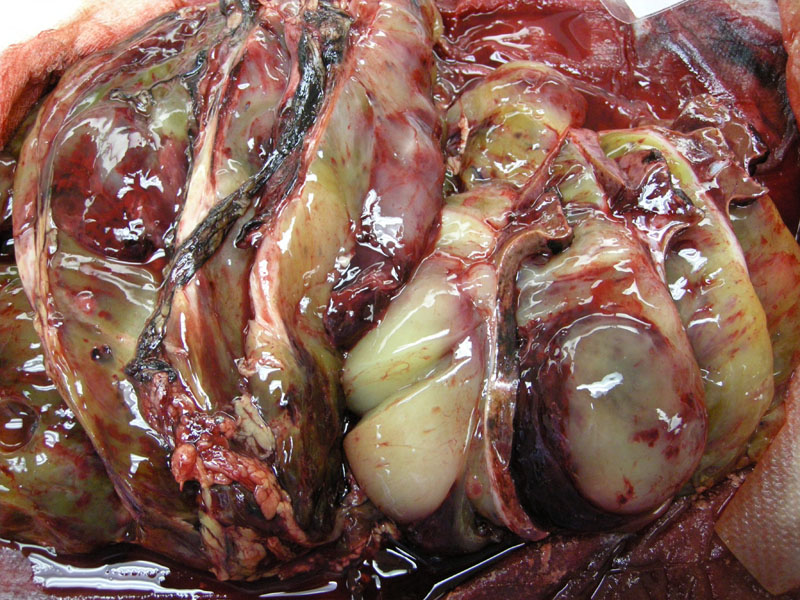 The tumor is shiny and gelatinous.
IMAGE DESCRIPTIONS

Stellate and spindled tumor cells are set in a mxyoid stroma.

The hyaline globules (cytoplasmic and stromal) stain with alpha1-antitrypsin.

Undifferentiated embryonal sarcoma is a rare neoplasm of childhood, typically occurring between ages 6-10. Older terms include malignant mesenchymoma, fibromyxosarcoma and rhabdomyosarcoma of the liver.

Grossly, the tumor is large (approximately 30 cm in diameter), soft with a shiny gelatinous surface. Degenerative changes such as necrosis, hemorrhage and cystic degeneration are common. Although the tumor may appear well-circumscribed, there is usually tumor infiltration beyond the pseudocapsule.

Microscopically, there is a mixture of atypical spindle and stellate cells with ill-defined cell borders embedded in a myxoid stroma. The neoplastic cells may contain PAS-D positive cytoplasmic globules -- these globules may also be present in the stroma and may be attributed to alpha1-antitrypsin (Iacbuzio). Large bizarre cells with hyperchromatic nuclei and multinucleated tumor cells are scattered throughout and mitotic activity is brisk. Extramedullary hematopoiesis is often identified, and entrapped hepatocytes and ductules are often seen on the periphery (Fletcher).

IHC studies of 14 primary and 2 recurrent embryonal sarcomas demonstrated that tumors are strongly positive for vimentin and the cytoplasmic globules stain with alpha1-antitrypsin. Focal positivity with keratins, desmin and SMA can be seen. The tumor is generally negative for HepPar1, AFP, S-100, HMB45 and CD34 (Zheng).

Do not confuse undifferentiated embryonal sarcoma with embryonal rhabdomyosarcoma, which arise from the major bile ducts at the hilum. Embryonal rhabdomyosarcoma affects younger children (<5 years) and presents with jaundice, fever and weight loss. Grossly, a botryoid (grape-like) gelatinous mass is seen in the lumen of common or left/right bile ducts. Microscopically, there is a zone of hypercellulary (cambium layer) and spindle cells in a myxoid stroma. Typical rhabdomyoblasts with cross-striations are rarely seen (Stocker, Cheng).

Most commonly occurs between age 6-10 with equal gender distribution. Typically presents with abdominal pain or an abdominal mass. Serum AFP (consistently found in hepatoblastoma and hepatocellular) is not present in this tumor.

Poor -- In a review 67 cases over 15 years, 73% of patients had died (Stocker). Complete surgical resection provides the best outcome, however, this is difficult since the tumors are often large on presentation. Lung, pleura and peritoneum are favored sites of metastatis.