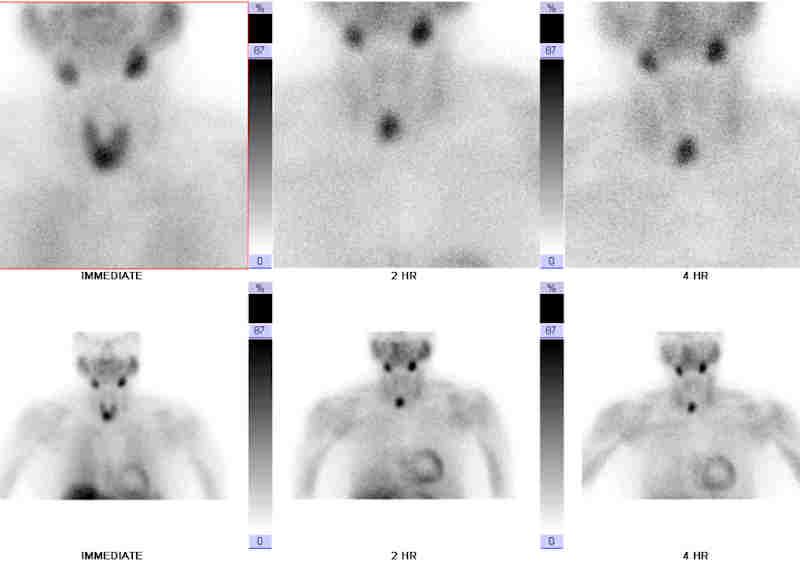 Parathyroid sestamibi scan demonstrating a right lower pole abnormality. A parathyroid adenoma will be seen as an area of enhancement. The other parathyroid glands are quiescent (suppressed by increased calcium levels) and thus, not seen. Sestamibi scans do not detect parathyroid hyperplasia as hyperplastic glands to do not absorb enough of the radioactive material.

Gross view of an excised adenomatous parathyroid gland. Note the large size of the gland; a normal parathyroid gland should measure less than 0.5cm. Usually found as a single encapsulated mass, although there are rare reports of two (double) adneomas.

Cysts can be present within the adenoma, which can contain eosinophilic secretions.

Uniform chief cells predominate in a glandular pattern in this adenoma. Glandular formation would not be seen in parathyroid hyperplasia. Parathyroid tumors with a prominent follicular pattern can be mistaken for thyroid follicular neoplasms (Fletcher).

Focal cytoplasmic vacuolization can be seen.

Normal compressed parathyroid glandular tissue can be seen here on the right. Usually, a capsule can be seen separating the lesion from the normal tissue, but the capsule is extremely attenuated here.

Some adenomas may show extensive clear cell change diffusely or focally at times.

Other adenomas grow in an anastamosing trabecular pattern, with intervening hypocellular edematous stroma.

Most (95%) cases of sporadic, but the familial cases are important to recognize and heavily tested. These include MEN type I, MEN type IIa, familial hypocalciuric hypercalecmia (FHH) and hyperparathyroidism-jaw tumor syndrome. The associated gene mutations are MENI in MEN type I, RET in MEN type IIa, CASR (calcium-sensing receptor) in familial hypocalciuric hypercalcemia, and HRPT2 gene in hyperparathyroidism-jaw tumor syndrome (Fletcher, Kumar).

MENI mutations are seen of course in MEN type I, but 20%-30% of parathyroid adenomas NOT associated with MEN I demonstrate biallelic mutations of the MENI gene (Kumar)

Adenomas are made of the 3 types of cells found in the parathyroid: chief cells, oxyphil cells and water-clear cells. Most adenomas are comprised of chief cells, which are polygonal with a centrally placed round nuclei. The oxyphil cells (with abundant pink cytoplasm filled with mitochrondria) and water-clear cells (cleared out cytoplasm) are thought to be variants chief cells and are found in increasing proportions as one ages as well as in hyperfunctioning glands (Rosai).

Note that in normal parathyroid parenchyma, you may often see fat, which is not usually seen in the adenoma. The surrounding parenchyma outside of the adenoma may be atrophic and shrunken due to feedback mechanisms, whereas in hyperplasia, the glandular epithelium is diffusely hyperplastic.

Parathyroid adenoma is common entity with an estimated incidence of 1/1000. Mean age at diagnosis is 50-60 with a predilection for women (F:M ratio of 3:1)(Thompson).

Patients with primary hyperparathyroidism are often found on routine screening of serum calcium levels. Additionally, they may present with symptoms of hypercalemia such as kidney stones and in rare instances, brown tumor of bone (osteitis fibrosa cystica). Remember bones, stones, abdominal groans and psychiatric overtones? In most health care delivery systems patients rarely present with advanced disease to the point of these overt symptoms. Nonspecific musculoskeletal pain is still fairly commonly seen on close questioning of hypercalcemic patients, and presentation with brown tumor of bone is rare in the US.

The treatment is surgical resection of the offending parathyroid gland(s). There is considerable literature (and debate) on the surgical indications for patients with asymptomatic hypercalcemia due to hyperparathyroidism.

Excellent with surgical excision of the offending gland(s).

Often in cases of four gland disease (parathyroid hyperplasia), all glands are excised and a small amount of parathyroid tissue is auto-transplanted to the arm (brachioradialis or deltoid muscles) where it functions normally. If the transplanted tissue in the arm becomes problematic in the future, re-excision can be done under local anesthesia and not in a previously operated neck. Another advantage of transplanting hyperplastic tissue to the arm is that it can be confirmed with parathyroid hormone levels to be the hyperfunctional tissue, rather than a supranumerary gland in the neck. (The half life of parathyroid hormone is 5 minutes and a blood pressure cuff can be used to occlude venous outflow from the arm).<