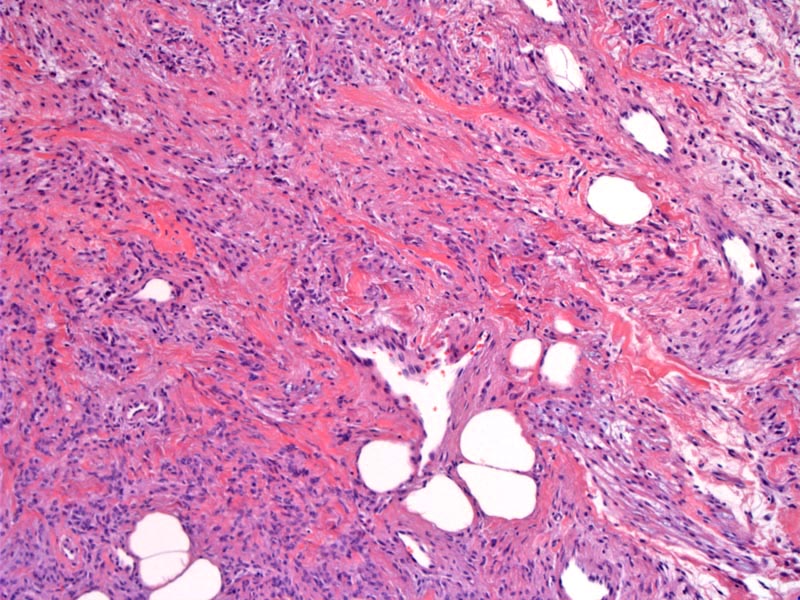 Importantly, there is no atypia or mitotic activity, although some reported cases do show a low mitotic count. Mast cells are also a frequent feature,

This different case is composed of fibroblastic-like cells with elongated nuclei to cells with overt myoid features consisting of abundant palely to deeply eosinophilic cytoplasm.

This example is composed of a somewhat less cellular spindle cell proliferation.

Myofibroblastoma of the breast is an uncommon benign tumor, which has the potential to show a wide variety of cytomorphologic features and architectural patterns. Several histologic variants (cellular, infiltrative, epithelioid, deciduoid-like, collagenized/ fibrous, lipomatous, myxoid variants), have been recognized in the last 2 decades.

Myofibroblastoma occurs mainly in older men and postmenopausal women as a solitary, unilateral, painless, freely movable, usually firm in consistency, nontender nodule. Patients may report that the nodule has been growing slowly over several months to years.

There has been no evidence of recurrence or metastasis after a follow-up of 15 years after excision (Magro, 2002)