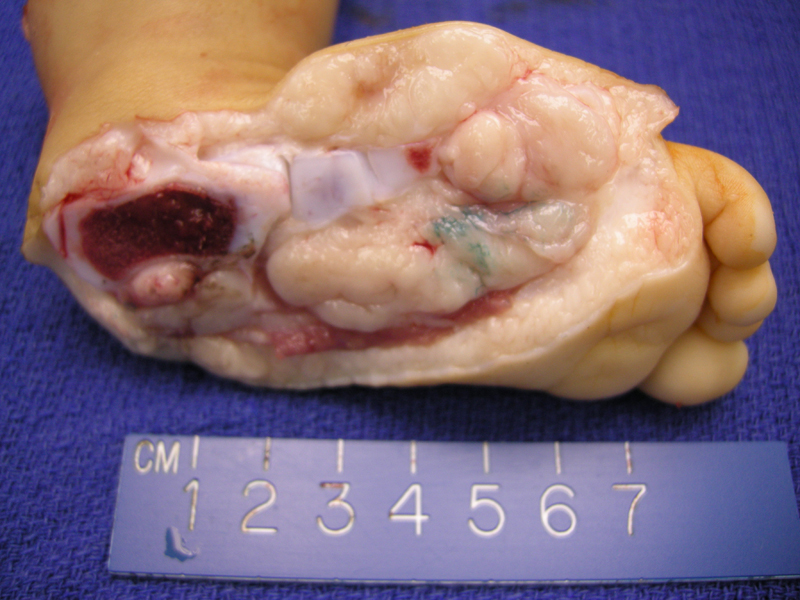 The tumor consists of a soft fleshy mass, in this case, almost identical to fatty tissue.
IMAGE DESCRIPTIONS

ARMS arising from a child's foot, consisting of a soft fleshy mass in a lobulated configuration. A strip of skeletal muscle can be seen in the lower image.

The classic architecture of ARMS consists of fibrous septae separating tumor cells into clusters. The cells in the center of the nests tend to detach and degenerate, lending a look reminiscent of lung alveoli.

Note the discohesiveness in the center of the cell nests.

The neoplastic cells invade through tendon -- longitudinal strips of pink fibers seen most clearly on the right image.

Desmin is an intermediate filament, present in both smooth and striated muscle. Positivity indicates muscle differentiation.3

In general, only the rhabdomyoblasts stain with desmin. Note the cross-striations highlighted by the desmin stain.

This separate case of ARMS demonstrates the typical architecture of clustsers of cells separated by broad bands of connective tissue. Multi-nucleated giant cells with wreath-like formation of nuclei are often described in the literature, but were not identified in this particular case.

Broad fibrous septae separate cords and nests of tumor cells. Note that the center cells are discohesive and detached, creating an open space.

Rhabdomyoblasts can have a spindled morphology. They are often called tadpole or strap cells.

In this FISH image, the combined signals (red and green together creating a yellow signal) indicate a normal chromosome with the target probes in their wildtype configuration. A break-apart signal with green and red signals separated (see nuclei in the top of image) indicates that a translocation has occured.

In general, the embryonal and alveolar tumors arise in children whereas pleomorphic rhabdomyosarcomas occur in adults. Embryonal lesions tend to affect younger children and the alveolar subtype is more frequent in adolescents. Rhabdomyosarcomas can arise in any anatomic location, but the most common sites are the head and neck, genitourinary tract, limbs and trunk. Alveolar lesions are more likely to arise in the limbs compared to embryonal lesions, which are more common in the head, neck and urogenital regions. Note that in adults, rhabdomyosarcomas are usually located in the limbs, regardless of histologic subtype.1

Grossly, alveolar rhabdomyosarcomas (ARMS) form in the deep musculature of the extremities. Histologically, there is a vague resemblance to alveolar tissue of the lung (hence the name alveolar rhabdomyosarcoma). Fibrous septae separate aggregates of tumor cells. The center of these cell nests degenerate while the periphery cells cling to the fibrous septae, lending the look of pulmonary alveoli. The neoplastic cells are round, with large dark nuclei admixed with rhabdomyoblasts. Rhabdomyoblasts, also know as tadpole or strap cells, are elongated or round cells containing eccentric eosinophilic cytoplasm in which cross-striations may be seen. These cells are immunopositive for muscle markers such as desmin, myogenin and MYOD1.2 Occasionally, multinucleate wreath-like cells are seen.

Note that the solid variant of ARMS can look very much like the embryonal subtype, with diffuse sheets of tumor cells. However, the cells and nuclei of solid ARMS will be larger than embryonal lesions and alveolar nesting will be focally present or highlighted by a reticulin stain. It is important to distinguish between these two subtypes because ARMS is a more aggressive tumor with a poorer prognosis.

In children, overall 5 year survival (for all rhabdomyosarcomas) approaches 70% with a combination of surgery, radiation and chemotherapy. In adults, 5 year survival survival is only ~20%.