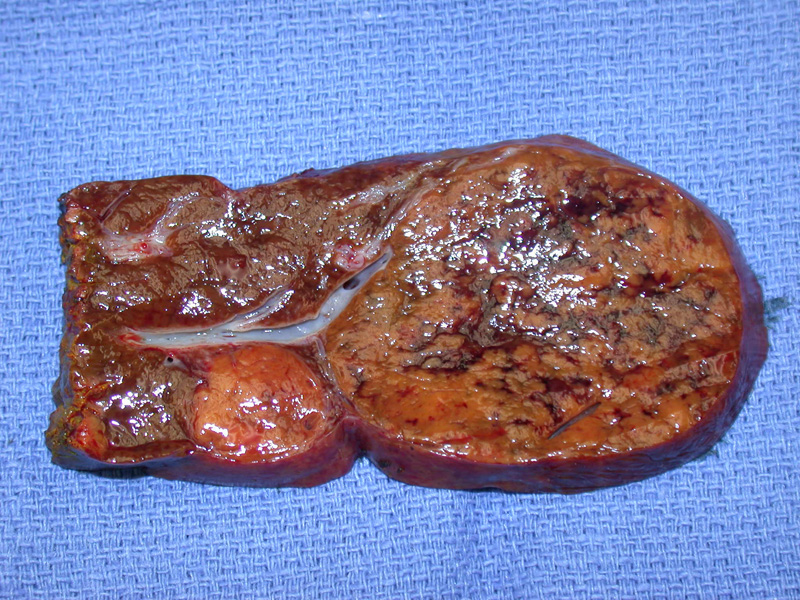 Grossly, the tumor is well-circumscribed, unencapsulated and shows a yellow-tan color. Hemorrhage can be seen in the center of the neoplasm.

And yet a different example of hepatic adenoma is seen here and shows similar features. The nodule is soft, homogenous, and red-tan.

This particular adenoma is less well-demarcated, but is a light tan-yellow color compared the rest of the liver. Note that the background liver is normal and not cirrhotic which is typical.

There is a uniform proliferation of hepatocytes without portal triads. The cell plates are arranged more irregularly and non-linearly than in normal liver.

The cytoplasm of the hepatocytes can be foamy and vacuolated. Hepatocytes are arranged in cell plates 1-3 cells thick.

Note the dilation of sinusoids, a common feature. Steatosis may also be found as seen here, as can bile stasis or lipofuscin pigment (not shown).

A closer image of the dilated sinusoids.

The interface between adenoma (right) and normal hepatic parenchyma (left) is seen here. There is no fibrous capsule.

The tumor is quite vascular with large vessels haphazardly arranged. Note again the absence of portal triads and steatosis as the hepatocytes contain fat and glyogen.

Lipochrome pigment is seen in many hepatocytes. This is a feature which is variably present in adenoma but is lacking in focal nodular hyperplasia.

When present beneath the capsule, there is generally a small layer of compressed hepatic parenchyma between tumor and capsule. This image demonstrates the adenoma with steatosis to the upper left, with the capsule to the right and normal in between the two.

A reticulin stain is normal, revealing that the cords are no more than 2-3 cells thick.

Hepatic adenoma (also known as liver cell adenoma) is a benign neoplasm consisting of hepatocytes. It occurs predominately in reproductive age women and long-term usage of oral contraceptives is a significant risk factor. Hepatic adenomas can occur in men who use anabolic steroids and in men with Klinefelter syndrome (Iacobuzio).

Hepatic adenomas may be associated with a b-catenin mutation and in this group there is slight risk of hepatocellular carcinoma developing. Other tumors may show hepatocyte nuclear factor 1alpha mutations, and such tumors often show steatosis, occur in younger patients, and in diabetics.

Grossly, the tumor is well-circumscribed, solitary and quite large (ranging from 10cm to 30 cm). The cut surface demonstrates a yellow-tan color. Necrosis and hemorrhage are common secondary changes. The rest of the liver should be normal.

Histologically, HAs may appear quite normal. The hepatocytes form cords that are no more that 2-3 cells thick, separated by endothelial-lined sinusoids. However, the neoplastic hepatocytes are actually larger than normal hepatocytes and the cytoplasm may be clear or vacuolated. Most importantly, no portal tracts are present and the arteries and veins are haphazardly arranged. Degenerative changes such as dilated sinusoids, blood-filled spaces, myxoid stroma, necrosis and infarct can be seen (Iacobuzio, Cheng).

95% of cases occur in women. The risk is 3.4 per 100,000 long-term users of OCPs. Presentation depends on size of the adenoma. Can present with occasional right upper quadrant pain or acute abdominal pain and shock from hemorrhage of the tumor (Iacobuzio, Cheng).

Risk of rupture with massive hemorrhage, which can lead to shock and death. Very rare instances of malignant transformation have been documented.

Occurs predominately in reproductive-age women and associated with oral contraceptive use.

Histologically, may appear normal except no portal triads are present.

In a hepatic adenoma, the neoplastic hepatocytes do not form cords more than 2-3 cells thick, helping to distinguish this benign entity from well-differentiated hepatocellular carcinoma.