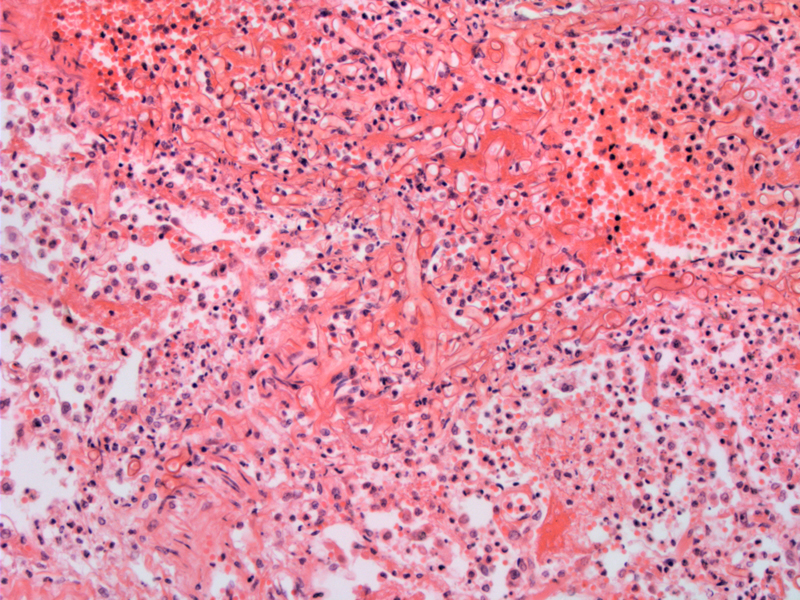 A muted pulmonary neutrophilic infiltate is seen in close association with the fungal hyphae. Often the inflammatory response in immunocompromised patients is limited as seen here.

The more accurate term for this fungal infection is zygomycosis since several classes of Zygomycetes can lead to the clinical syndrome not just Mucoraceae. However, mucormycosis is still the term used by most practicing clinicians.1

Zygomycetes are commonly found in the environment and in fact, all humans have been exposed to these fungi in soil, vegetation and even breads. For the most part, only severely immunocompromised hosts succumb to infection. Rhizopus (member of Mucoraceae family), for instance, thrive in an acidic high glucose environment.1,2

Pulmonary zygomycosis occurs when the infectious spores are inhaled into the alveoli and wreak havoc. Pneumonia and massive hemoptysis (due to angioinvasion) can be the presenting symptoms. In both rhino-orbital-cerebral and pulmonary zygomycosis, the clinical course is rapid and often fatal. Note that there are other (less common) forms of zygomyosis such as GI, skin and kidney infections, but they will not be discussed here.

The clinical course is usually that of a rapid and fulminant infection. Despite aggressive intervention, the mortality rate ranges from 35% (patients with no underlying conditions), to 44% for diabetics and 83% for those receiving deferoxamine therapy.