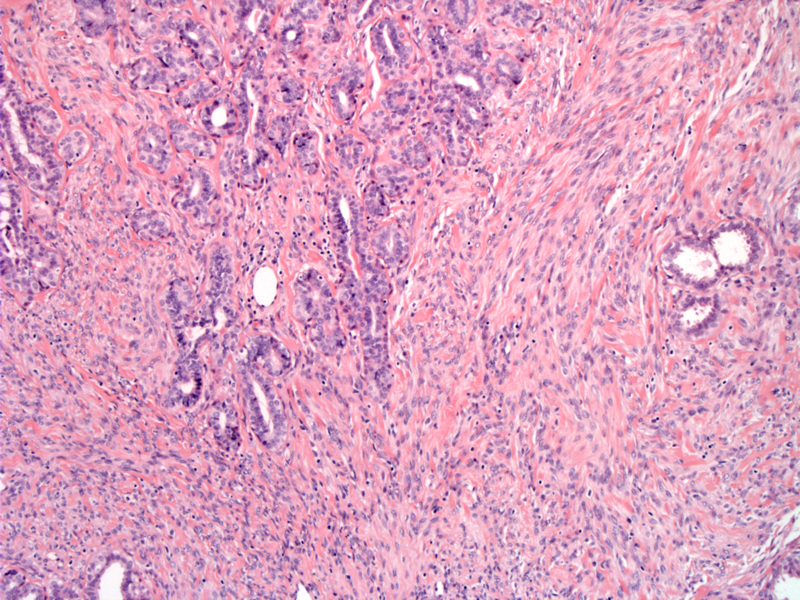 Microscopically, as in all hamartomas, it is composed of disorganized native elements. Stroma surrounds ducts and lobular structures. The lobules are ill-defined and may merge with each other. Importantly, epithelial components exhibit a normal bilayer (single layer of epithelium with an underlying layer of myoepithelium) and epithelial hyperplasia is rare.

A well-circumscribed border can be appreciated. Lesions are freely mobile and therefore clinically felt to be a fibroadenoma.

The stroma may occasionally demonstrate smooth muscle differentiation, or in some instances, be hyalinzed or contain adipose tissue. In some cases, cystic change may be found.

The ducts are bland and lined by an intact layer of myoepithelium.

The ducts may be ectatic and disorganized, but there is no significant proliferation changes.

This is from a different case. Stroma proliferation is evident and a lonely epithelial structure is seen.

Scattered lobular elements in no apparent normal arrangement are evident. The normal intervening stroma of the breast has been obliterated. As you can sense by now, no specific diagnostic features are particularly characteristic of this lesion.

The stromal cells have more abundant pale cytoplasm and are growing haphazardly. Overt myxoid change has been described in some cases, as well as stromal calcification and pseudoangiomatous hyperplasia (Tse).

Mammary hamartomas are rare lesions that usually arise in perimenopausal women. They are benign lesions that may mimic fibroadenoma or phyllodes tumor clinically. They are usually between 1-4 cm in diameter, but may be as large as 15 cm in some cases. Grossly, tumors are well-circumscribed with a fleshy rubbery parenchyma, and lobulation as seen in fibroadenoma are not appreciated.

Ectatic ducts may be seen. Islands of adipose tissue may be seen between the lobules ("adenolipoma") or there may be smooth muscle differentiation in the stroma surrounding the lobules ("myoid hamartoma")(Fletcher, O'Malley). In cases made up predominantly of fat, the term adenolipoma has been applied.

Usually in pre and peri-menopausal women but can occur in a wide age range. Clinical features are similar to fibroadenoma in that they present as a well-defined rubbery mobile mass. Mammogram shows a well-circumscribed dense round or oval mass with a central lucent zone (O'Malley).

Excisional biopsy is curative. No recurrences have been reported.