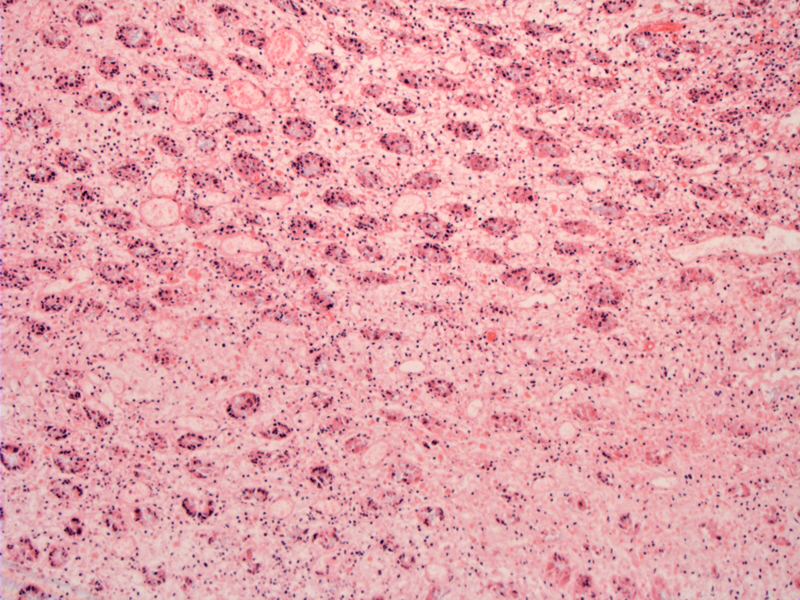 In neutropenic enterocolitics, there is often a paucity of inflammatory cells and neutrophils -- but damage to the bowel is evidenced by mucosal and submucosal edema, epithelial sloughing, hemorrhage, and patchy-to-complete epithelial necrosis.

A vigorous inflammatory process involving colon and/or small bowel (colon seen here) can result in ischemia, necrosis, bacteremia, hemorrhage and perforation. The surface (left) is lined by a granular necrotic alteration. Note that although usually, inflammatory cells are sparse in typhlitis, they can be present despite the overall neutropenia of the patient.

In this case, bacterial colonization of necrotic bowel wall was compatible with Clostridium. Fungi such as Candida may also be the causative or contributing agent. The most common pathogens recovered from blood cultures include the enteric gram negative bacilli Pseudomonas aeruginosa, Escherichia coli, and Klebsiella spp (Ullery).

Neutropenic enterocolitis (NEC) or typhlitis represents a clinical syndrome in which the cecum becomes inflamed in the setting of hematologic malignancies or chemotherapy-induced neutropenia. More recently, an association between NEC and taxanes (docetaxel,

paclitaxel) and vinorelbine, used to treat a variety of solid tumors has been established in the literature. The exact pathogenesis remains uncertain, but current understanding emphasizes a multifactorial pathophysiology involving intestinal mucosal injury, neutropenia, and impaired mucosal defense against gastrointestinal microorganisms. Clostridium septicum has been implicated as one of the causative organisms, as well as fungal organisms.1-3

As a sidenote on terminology, I originally associated the term typhlitis with a infection with Salmonella typhi. However, a short Googling session reveals that the term typhlon means "cecum" in Greek and the root typhlos means "blind", "closed" or "smoky". Thus, typhlitis refers to inflammation of the cecum and typhoid fever was so named because of the stupor it produces. The root of this word is a bit obscure and either way, typhlitis is not caused by Salmonella typhi.

Neutropenic enterocolitis has a predilection for the cecum, but may involve nearly any segment of the gastrointestinal tract. Microscopically, the picture is that of significant bowel damage with edema, sloughing of epithelium, hemorrhage and necrosis. There is usually a lack of neutrophils or other inflammatory cells due to the overall neutropenic state of the patient, however, some sources assert that the presence of neutrophils can be found in cases of typhlitis and does not rule out the diagnosis.1

Patients with severe neutropenia are affected. The entity was originally described in pediatric patients undergoing induction chemotherapy for acute leukemia, but all ages can be affected.2

The classic clinical features include fever and abdominal pain, with supporting features of bowel wall thickening on ultrasonography or CT imaging. Computed tomography has a sensitivity of 92% in the setting of inconclusive findings on physical examination, with abnormal findings such as diffuse bowel wall thickening, intramural edema or hemorrhage, accumulation of paracolonic fluid, free air, and pneumatosis intestinalis. Note that the cecum is always involved, but the process may extend toward the ascending colon or the terminal ileum.3,4

In some cases, the paucity of inflammatory cells in these patients may mask or delay symptomatology, allowing the process to evolve rapidly from mild abdominal pain and low-grade fever to life-threatening septic shock. When present, abdominal pain or tenderness frequently is diffuse, and it localizes to the right lower quadrant in about half of patients.

Disease severity that ranges from mild to fatal. Restoration of the neutrophil count is critical to recovery.