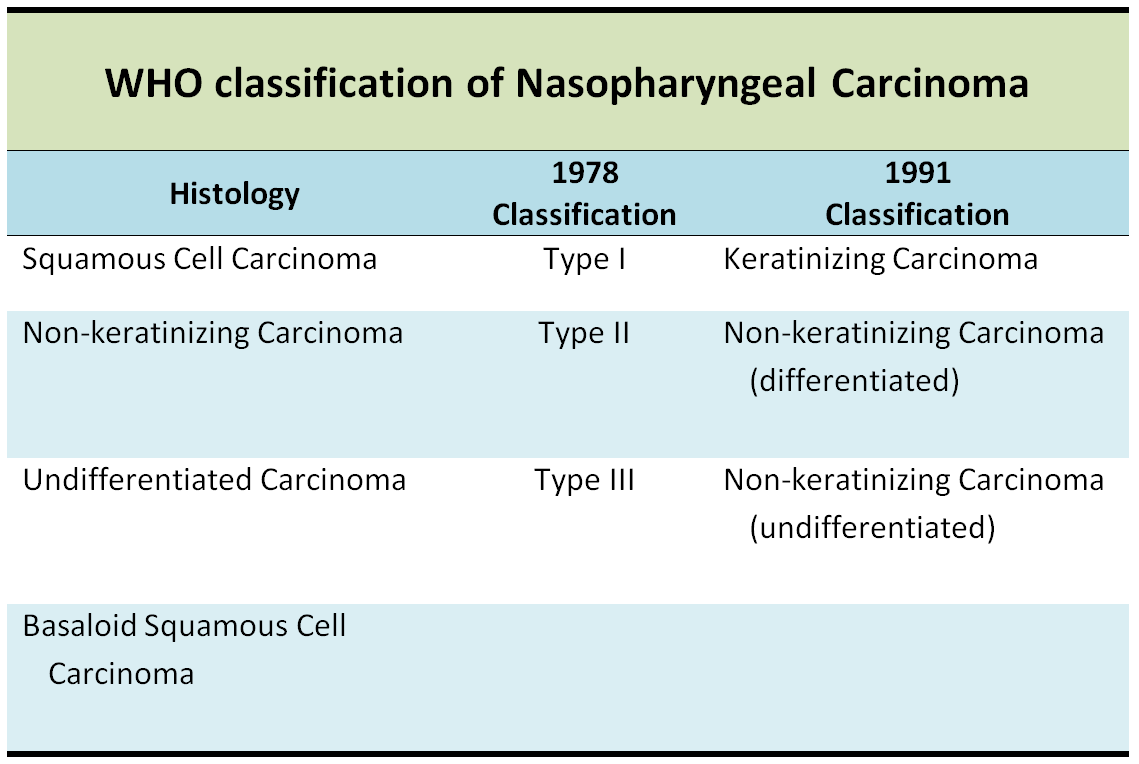 Chart depicting WHO classification of NPC.

Nasopharyngeal carcinoma of the non-keratinizing undifferentiated type shows large neoplastic epithelial cells with a brisk intervening lymphocytic component. There is no evidence of keratinization in this subtype.

Synctial growth of tumor cells is seen with intimately admixed lymphocytes, making it hard to tell where the tumor cells lie exactly.

Large areas of geographic necrosis are typical in this subtype, with residual cells often clustered around tumor vessels.

EBV is the well-established etiological agent in the undifferentiated subtype. The in situ hybridization reaction for this virus, using EBER-1, characteristically stains the majority of the malignant epithelial cells, with rare or absent staining of the non-malignant lymphoid component.

This different case shows evidence of keratination (upper portion) which designates this as the keratinizing variant of nasopharyngeal carcinoma, WHO type I.

The p63 is strongly positive in the keratinizing variant.

The keratin 5/6 also positive. The EBV in situ stain was negative.

The non-keratinizing undifferentiated subtype is most common and often contains an intermingled population of lymphocytes, hence, its traditional name of "lymphoepithelioma" even though the lymphocytes are NOT neoplastic. This undifferentiated type is most strongly associated with EBV and tends to affect middle-aged men in South China and Southeast Asian (Thailand, Phillippines and Vietnam) and male children in North Africa. Risk factors include EBV infection and diets containing nitrosamines (salted preserved foods) (1,2).

Bimodal age distribution with a large peak age at 40-60 and a smaller peak late childhood (15-25 years); predilection for males (M:F of 3:1); prevalent in South China, Southeast Asia and to a lesser extent, North Africa.

Note that the keratinizing subtype has a different epidemiologic parameters (see above).

Most commonly presents with unilateral cervical lymphadenopathy (70% of cases) as this tumor has a propensity for regional node metastasis (1,2). Other nasal symptoms such as nasal obstruction, discharge, epistaxis. More advanced disease may cause hearing loss (eustachian tube obstruction) and cranial nerve involvement.

There is good long-term local and regional control rates for nasopharyngeal carcinomas after definitive radiotherapy. Patients with advanced stage tumors and keratinizing squamous histology have a relatively poor prognosis when treated with conventional radiotherapy alone, and are candidates for dose escalation or combined modality studies.

is widely accepted, but studies do not support that WHO type II non-keratinizing carcinoma represents a distinct histological pattern or that it has clinical relevance. Serological studies

have supported WHO type I as being a distinctive group, while WHO types II and III share

Overall, prognosis is stage dependent, but 5 year survival is approximately 55-65%. The keratinizing type has a worse prognosis, with 5-year survival of less than 20%, which is most likely a result of higher resistance to radiation (1,2).