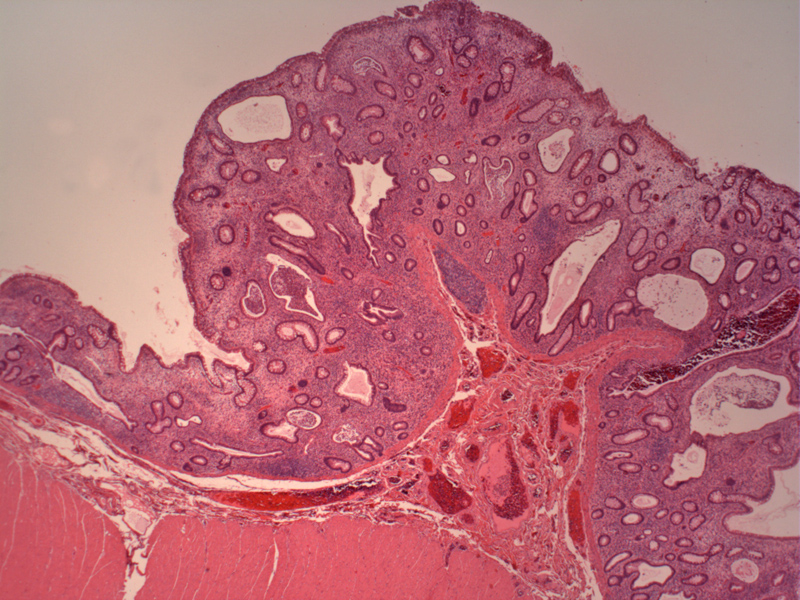 This gastric lesions shows relatively atrophic epithelium to the left, then a broad based sessile polyp.

The mucosal folds are thrown up into a polypoid configuration. The mucosa shows thickened hypertrophic gastric folds mimicking Menetrier's disease but can also appear atrophic appearing with superimposed polypoid lesions.

First reported in 1955 by Leonard Wolsey Cronkhite Jr., an American

internist and Wilma Jeanne Canada, an American radiologist (Cronkhite). It is characterized by non-adenomatous juvenile type or hamartomatous polyps throughout the gastrointestinal tract that are part of a generalized GI mucosal disturbance resulting in malabsorption and protein losing enteropathy. Other findings include alopecia, nail dystrophy, and skin pigmentation, problems thought to be related to profound malnutrition. The etiology remains unknown.

The mean age of onset is in the fifth to sixth decade, with a slight male predominance.

Supportive therapy with electrolyte solutions an transfusions of blood components. treatment with corticosteroids, disodium cromoglycate, loratadine, ciprofloxacin, and zinc, have shown in some studies to result in clinical and partial endoscopic remission (Serrano).

Overall poor prognosis. As many as 15% develop adenomas or carcinomas of colon as well as of the stomach. However, the major problem is protein loss from damaged mucosa and malabsorption. Profound malnutrition is the major cause of morbitity and mortality. While remission may occur, survival beyond 2 years for symptomatic individuals is uncommon.