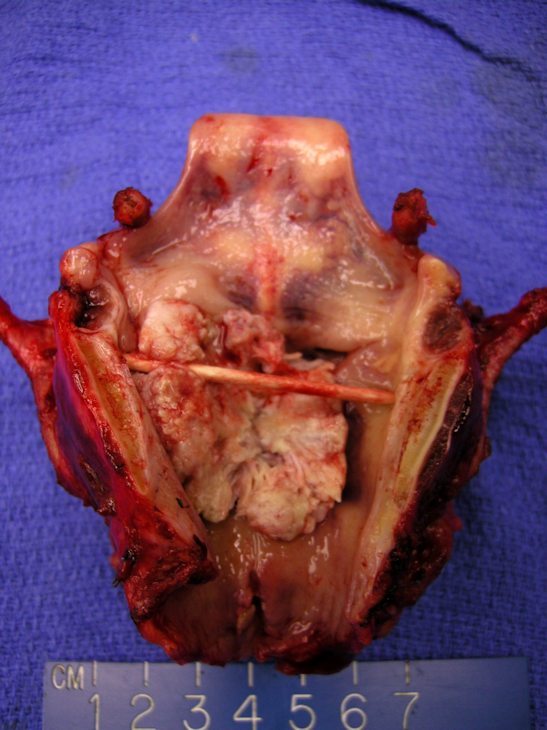 Larynx after removal. An obstructing lesion is seen within the endolarynx. Lesions of the glottic larynx may access the paraglottic space and spread inferiorly and superiorly to the superglottis and subglottis respectively. Additionally, as they grow through the thyroid cartilage, they may access the soft tissue of the neck.

Obstructing subglottic spread is noted. This patient had a tracheostomy placed days before laryngectomy after presenting with airway obstruction. The tracheosomty site is visible as the hole in the trachea.

This particular tumor shows only mild to moderate nuclear atypia and grows in the typical back-to-back architecture.

Marked parakeratosis is seen here as orangophilic cells with occasional remaining nuclei within the keratotic debris.

This laryngectomy contains a bulky obstructing supraglottic squamous cell carcinoma that is locally advanced. Neck contents are attached as well.

The larynx is divided into three anatomic regions with several subsites:

Smoking is the primary risk factor for laryngeal cancer. Alcohol use, particularly hard alcohol, and GERD are also recognized as risk factors for squamous cell cancer of the larynx.

Glottic tumors typically present with hoarseness in a patient with a smoking history. Hemoptysis may be seen as well. Supraglottic tumors often present only after persistent symptoms of dysphagia, odynophagia, and otalgia, while subglottic tumors more often present in the emergent setting with airway obstruction or vocal fold paralysis.

For early stage glottic cancer, surgical resection and radiation therapy offer compatible high cure rates. As stages increase, there are still conservative surgical options with varying degrees of voice and swallowing morbidity after surgery. Total laryngectomy remains an option with the signifacnt hit to patients' quality of life. Definitive chemo/radiation therapy for higher staged cancer offers patients the chance for organ preservation with significant accompanying voice and swallowing morbidity as well. In cases of gross laryngeal destruction, patients patients may not be candidates for an organ preserving treatment approach, and progress directly to total laryngectomy with post-operative radiation therapy.

Speech rehabilitation after total laryngectomy can be accomplished with esophageal speech and with tracheo-esophageal puncture, allowing larngectomees to divert air from the stoma to the neopharynx to produce a voice.

Tumors limited to the glottis have little access to lymphatic drainage and pose only a very small risk of lymph node metastasis with T1 or small T2 lesions. In contrast, up to 55% of patients with supraglottic cancers have clinically involved lymph nodes and up to one half of the remaining clinically node-negative patients have pathologic nodal involvement on further evaluation (Lee). Subglottic tumors have a similarly high rate of lymph node involvement, but in contrast to supraglottic cancers, which tend to preferentially involve the upper and mid-jugular nodes, they tend to involve to the lower jugular, pretracheal, and prelaryngeal (Delphian) nodes first.

Laryngeal squamous cell carcinomas have a rather low (less than 10%) overall incidence of distant metastases , with supraglottic and subglottic cancers accounting for most cases.