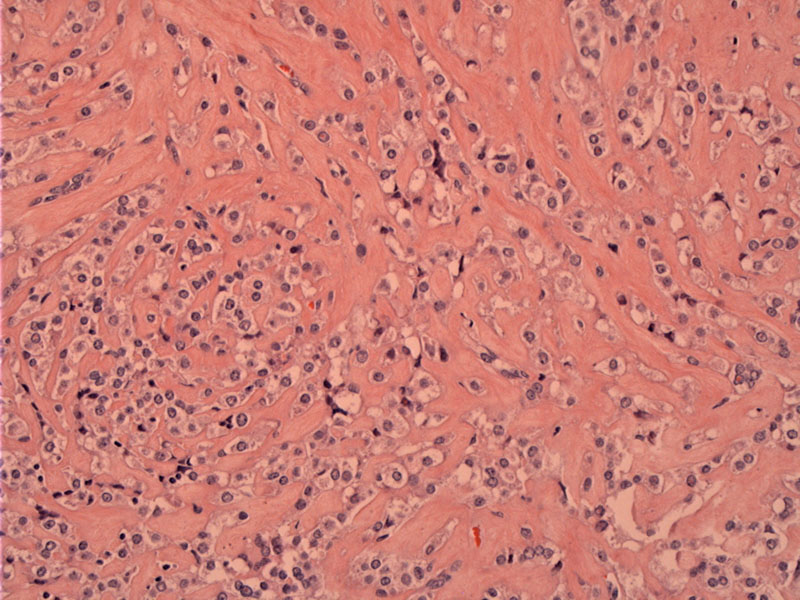 PEComas can grow in a variety of patterns including a growth pattern, or arranged in fascicular bundles or diffuse sheets. A network of small capillaries distributed throughout the tumor has been described in most instanced. Varying degrees of stromal hyalinization, as seen here, represents another recognized feature.

The lesion-myometrial interface shows a circumscribed lesion that irregularly admixes with the normal smooth muscle cells.

The uterus and retroperitoneum are the most frequently involved sites of perivascular epithelioid cell tumors (PEComas). This neoplasm remains poorly defined, characterized by spindle and epithelioid cells with clear to eosinophilic cytoplasm that have immunoreactivity for melanocytic markers, most frequently HMB-45. They also demonstrate a highly characteristic network of small capillaries reminiscent of clear cell RCC. PEComas have also been described in the cervix, vagina, pelvis, broad ligament, and ovary (Fadare) and arise predominantly in females.

PEComas are not sufficiently homogeneous to allow for a uniform statement about their prognosis, as they seem to represent a group of tumors with a range of behaviors. (Fadare). Larger tumors and those with coagulative necrosis, significant cytologic atypia, or high mitotic counts are more likely to behave in a malignant fashion compared to smaller ones (Fadare). However, beware, as rare cases showing very minimal to no mitotic activity have shown metastatic behavior!

In a study of 35 PEComas from a variety of sites, Folpe prognostically classified them into 3 groups: (1) a malignant group comprised of tumors with 2 or more worrisome features (>5 cm, infiltrativeness, high nuclear grade and cellularity, mitotic rate >=1/50 HPF, necrosis, and LVI), (2) a benign group that lacks all of the aforementioned features, and (3) a group of tumors of “uncertain malignant potential” characterized by tumors >5 cm in size OR nuclear pleomorphism/giant cells as the only worrisome feature. It is not clear, however, if this system is directly applicable to uterine PEComas.