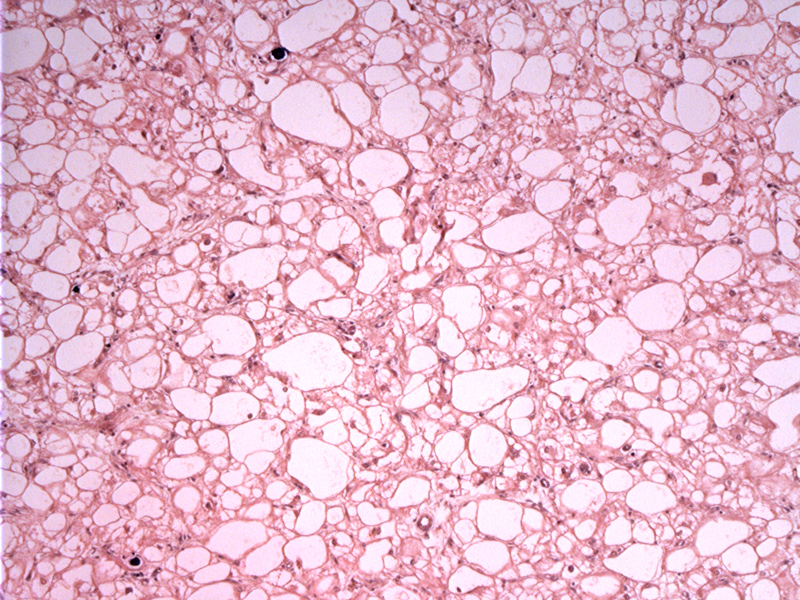 The tumor is composed of large cells with abundant clear vacuolated cytoplasm. The stroma is scanty. Due to the high glyogen content, these cells would be strongly PAS positive.

Cardiac rhabdomyoma is the most common benign congenital cardiac neoplasm. An intracardiac mass seen in an infant is most likely a rhabdomyoma. The majority of tumors are multiple with the ventricles being most frequently involved. Involvement of the atria range from 3% to 30% (Fletcher).

Grossly, the tumor is circumscribed with a waxy consistency and range from a few millimeters to several centimeters. Occasionally, the tumor may be so large as to obliterate the entire cavity. Histologically, there is a proliferation of swollen myocytes with clear, glycogen-containing cytoplasm with a centrally placed nucleus. Strands of cytoplasm extend to the periphery of the cell, thus, eliciting the descriptive term "spider cell" for these myocytes. Striations can often be seen in the eosinophilic strands, and the stroma surrounding the tumor cells is sparse (Fletcher).

The tumor demonstrates positivity for normal heart muscle markers such as myoglobin, actin, desmin and vimentin.

The clinical presentation varies and ranges from stilbirth and perinatal death to a largely asymptomatic picture. In other patients, the tumor may cause heart failure due to outflow obstruction, arrhythmias, and thromboembolic disease. Rare instances of myocardial infarction in utero and sudden death have been reported (Fletcher). The left ventricle is the preferential site in the heart, although it any chamber may be involved.

Spontaneous regression is the rule, so if a diagnosis of rhabdomyoma is made, no treatment is necessary unless the lesion is causing a life-threatening condition.

→The characteristic cell is the so-called spider cell.

→Spontaneous regression occurs in the majority of cases.