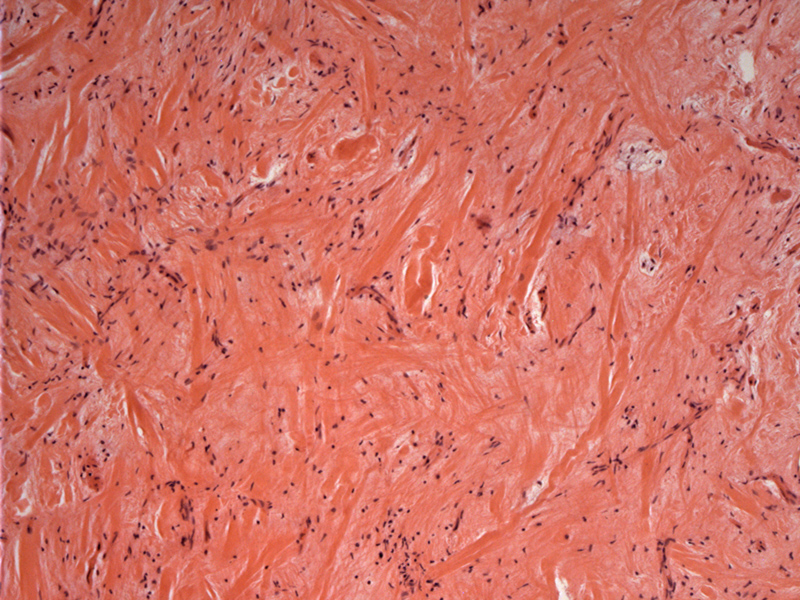 The tumor is composed a relatively acellular hyalinzed collagenous core and there is ususally increased cellularity consisting of spindle cells in bundles at the periphery. The neoplastic spindle cells are fibroblastic in nature. Other elements include elastic fibers, myocytes, cystic degeneration and calcifications (Fletcher). In this example, monomorphous fibroblasts with scant cellularity populate the lesion, consistent with an older lesion.

The fibroma can be heavily collagenized, especially in the central core.

This trichrome demonstrates a fairly well-circumscribed tumor, but some irregular trapping of normal myocardium is also present.

Intratumoral calcification is a frequent finding in these tumors.

This case (highlighted by trichrome staining) shows a more irregular border with infiltration of the tumor into the adjacent myocardium.

Cardiac fibromas are rare, although they are not uncommon among the pediatric population. Grossly, these tumors appear as whitish lesions clearly demarcated from the myocardium, however, on microscopic examination, the tumor-normal interface is not so clear cut. Often, the neoplastic fibrous element intermingles with the surrounding myocardium.

The majority arise in children, most often under 1 year of age (although elderly may be affected); Symptoms generally correlate with tumor size and location. For instance, fibromas located in the ventricular septum may lead to ventricular fibrillation, CHF or sudden death. Tumors located in the ventricular free wall or atrium tend to be asymptomatic (Fletcher). There are a few reported cases of cardiac fibromas in the setting of Gorlin syndrome (nevoid basal cell carcinoma syndrome).

Some have been shown to regress spontaneously. Patients tend to do well following excision.

→One of the most common cardiac tumors in the pediatric population.

→The tumor cell is of fibroblastic origin.

→Symptoms depends on the size and location of the tumor.

→A few cases have occurred in the setting of Gorlin Syndrome.