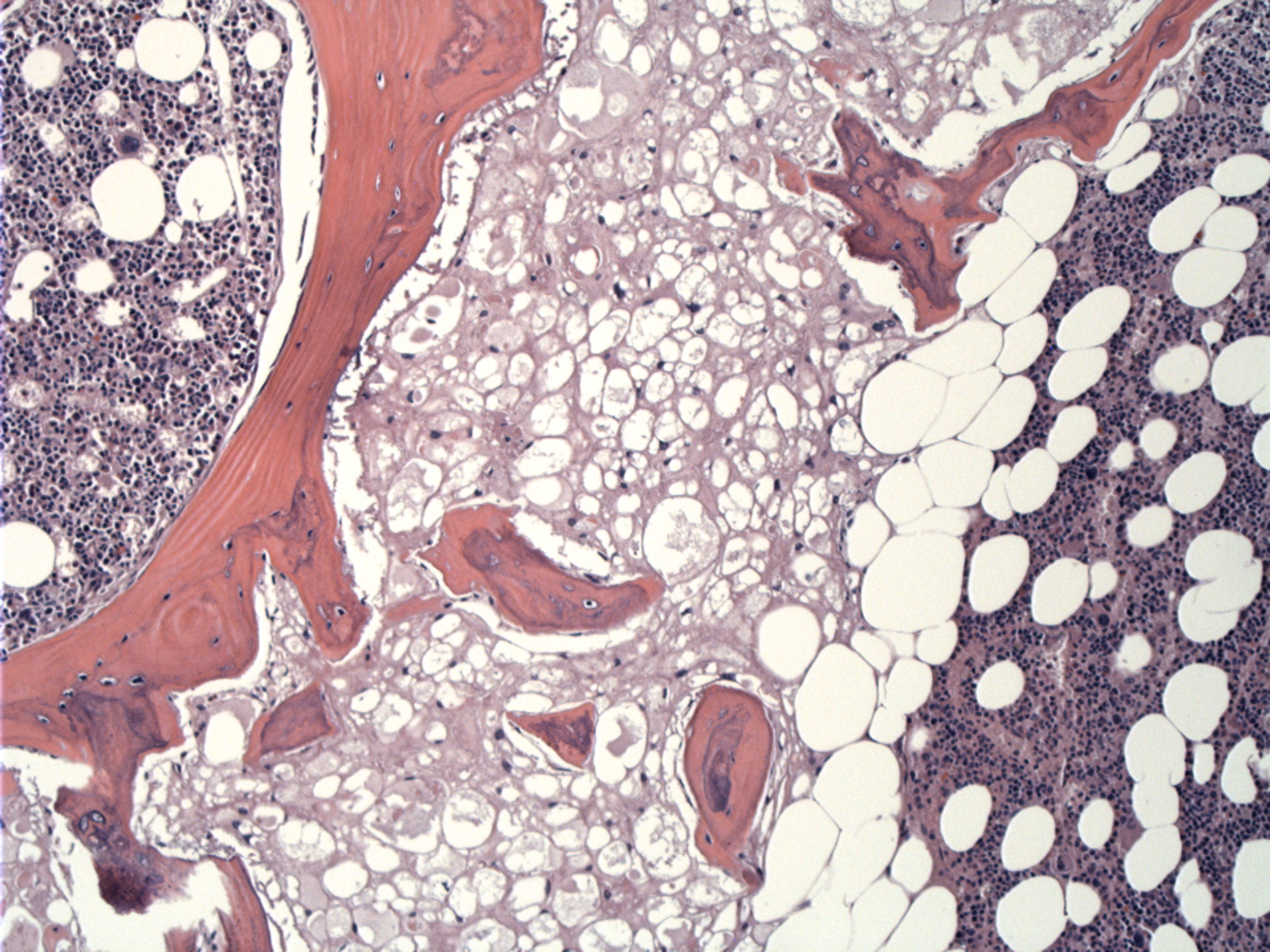 The neoplastic cells infiltrate marrow space. Normal marrow is seen to the far left. At first glance, the tumor may appear to simply represent fat necrosis.

High power view of the cells show their bubbly (physaliphorous, if you will) nature. The neoplastic cells may often exhibit epithelioid morphology, arranged in cords in a mucoid stroma, but this particular arrangement is not so prominent in this patient.

Normal cartilage is seen in the bottom right, transitioning to the underlying bony trabeculae. The neoplasm replaces the space between the trabeculae as a vacuolated lesion resembling swiss cheese.

Keratin AE1/AE3 is the best discriminator between chordoma (100% positivity) and chondrosarcoma (0% positivity)(Prayson).

Cytokeratin 19 is also strong, as expected since chordomas stain for epithelial markers.

This other example shows cells with better defined cell borders and a more epithelioid appearance.

Chordomas are malignant tumors that arise from notochord remnants and demonstrate dual epithelial-mesenchymal differentiation (Casali). Chordomas always arise in the midline and most often at either end of the spinal column. Approximately half are located in the sacrococcygeal region and a third are located in the spheno-occipital region (usually involving the clivus). The remainder arise in the vetebrae.

Grossly, chordomas are lobulated separated by fibrous septate. The cut surface is gelatinous and occasionally chondroid (chondroid chordoma). Histologically, tumors cells arranged in cords are embedded in an abundant myxoid matrix. The tumor cells have abundant cytoplasm; some cells have bubbly vacuolated cytplasma and are called physaliphorous cells (physa = to blow; phorous = to bear), a helpful diagnostic feature. The tumor cells often appear epithelioid and resemble a metastatic carcinoma.

Chordomas arising in the base of the skull often exhibit chondroid differentiation and are considered a variant termed "chondroid chordomas" and have a better prognosis compared to conventional chordomas (Fletcher).

An important differential diagnosis to consider is a chondrosarcoma or myxoid chondrosarcoma; IHC stains can help distinguish the entities. Chordomas are positive for epithelial markers (unlike chondrosarcomas or chondroid menigiomas). Furthermore, S-100 will be positive, which will be helpful in distinguishing this entity from metastatic carcinoma. Chondrosarcomas tend to be lobulated, but do not exhibit fibrous septae (Prayson, Fletcher).

Twice as often in men and mostly affects adults. Those arising in younger patients are usually skull-based (Fletcher, Casali).

Presenting symptoms depend on the location of the tumor and which nerve roots are involved. Bone destruction is common. Chordomas arising in the sacrum lead to pain, sphincter disturbance and constipation. Those located in the spheno-occipital region cause headahces, diplopia and cranial nerve palsies (Prayson, Fletcher).

On imaging, destruction of bone and infiltration of adjacent soft tissues may be seen.

Wide resection is the preferred treatment. For subtotal resection, radiation will be employed.

Recurrence is common, especially in subtotal resections. In rare instances, there is malignant transformation into a high-grade sarcoma. Metastases (to lungs, liver, lymph nodes and skin) has occurred in a subset of tumors.