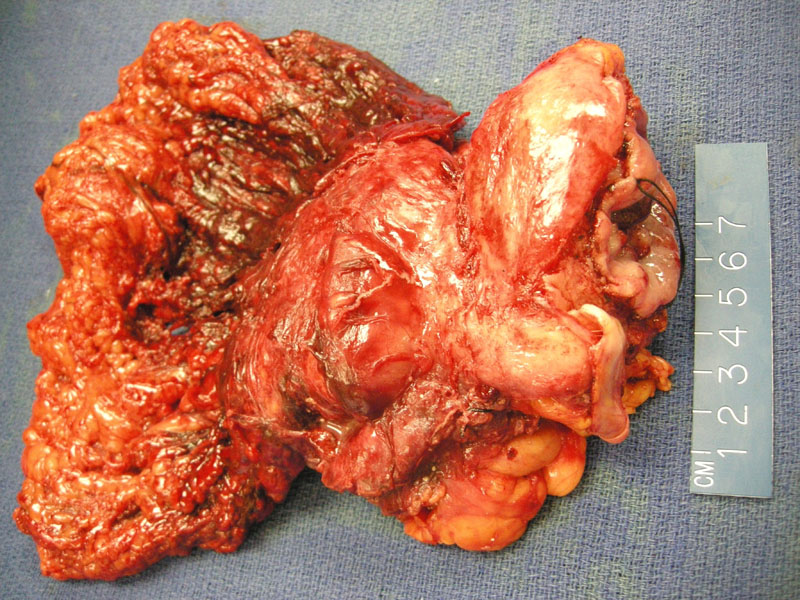 The external surface of the resection shows an erythematous edematous bladder dome region and a large mass attached superiorly.

Closer image shows the infiltrative nature of the mass replacing the muscularis.

Bladder muscularis is seen on the right. The lesion arises from even deeper portions of the bladder wall, in the region of the urachus.

Fascicles of spindle cells with scattered inflammatory cells are the key histologic features.

A different ares shows a more myxoid quality to the stroma.

Among the spindle cell is a sprinkling of inflammatory cells.

The urachus is the remnant of the embryonic allantois (which drains the fetal bladder and assists with waste and gas exchange). Failure of this structure to close leads to a persistant connection between the bladder and the umbilicus. Cysts, diverticula and tumors can develop. The urachus is lined by urothelium and surrounded by connective tissue and smooth muscle. Cases of urachal adenocarcinoma and transitional cell carcinoma have been documented.

Mesenchymal tumors are exceptionally rare and includes desmoid tumors, leiomyomas and inflammatory myofibroblastic tumors (IMTs)(Nascimento). IMTs are low-grade neoplasms most often seen in the lung and abdomen of children and young adults. It is not entirely clear whether IMTs evolve from a reactive or neoplastic process, however, a subset of these tumors (usually seen in the children and younger adults) have demonstrated translocations involving the ALK (anaplastic lymphoma kinase) gene located on chromosome 2p23. This translocation often fuses the ALK gene with tropomyosin 3 or 4, creating constitutively active oncoproteins -- this overexpression of ALK protein can be detected on IHC, seen as ALK positivity (Tsuzuki).

IMTs are considered a low-grade neoplasm (borderline malignancy) and a minority of cases recur and a handful of cases have been metastatic.