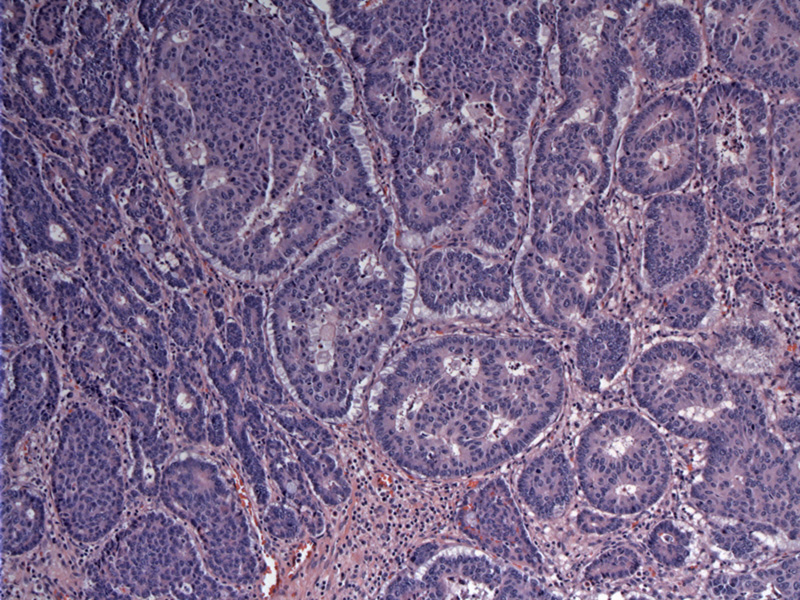 Tumor within the wall shows areas of conventional appearing carcinoid tumor as seen here by well-demarcated nests with lumen formation.

As the tumor cells invade the muscularis propria, they are arranged in well-formed oval or round clusters with minimal or no desmoplastic response. There is minimal cytological atypia.

Mucin containing goblet-shaped epithelial cells arranged in round or oval clusters are seen in intimate association with traditional neuroendocrine cells.

Mucin containing goblet-shaped epithelial cells are seen here on higher power, as they maintain the architecture of a neuroendocrine lesion. The goblet cells contain a blue mucin vacuole that pushes the nucleas to the periphery. Mitoses are seen.

Part of the criteria for diagnosis is neuroendocrine differentation. Focal chromogranin is seen in this tumor.

Strong synaptophysin is present in the solid areas, but more limited in the areas with goblet cells (bottom and left)

Carcinoids are common neoplasms of the appendix -- reports vary, but they account for 17% to 57% of all appendiceal tumors (McGory, Toumpanakis). The prognosis of carcinoids is extremely good and are usually incidental findings during appendectomy. Carincoids that may require further treatment include size greater than 2.0cm, location at the base of the appendix or extension past the serosa.

A subset of carcinoids, however, exhibit features of both carcinoids and adenocarcinomas and have been variably termed adenocarcinoids or mucinous carcinoids. The current WHO designation for these entities is "goblet cell appendiceal carcinoid", which are histologically characterized by mucin filled goblet cells intimately associated with typical neuroendocrine cells (Toumpanakis).

Mean age at diagnosis is 58 versus 35 years for typical carcinoids (Pahlavan, Toumpanakis). The most common clinical presentation includes abdominal pain and a palpable mass followed by symptoms related to acute appendicitis. Among female patients, the majority present with ovarian masses with presumed preoperative diagnosis of a primary ovarian tumor (Tang). The majority of tumors are >2 cm in size at detection.