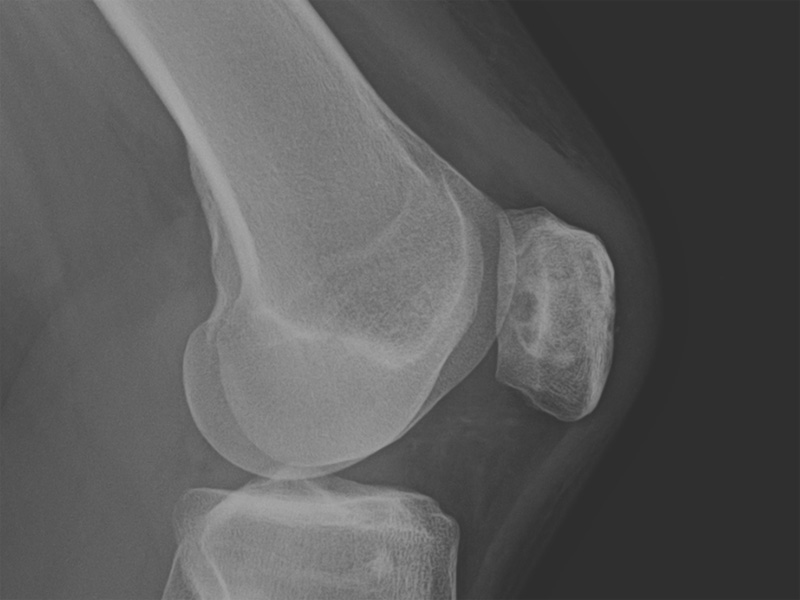 The patella is a less common area to have chondroblastoma. A mixed sclerotic and lytic lesion with well-defined borders is seen here in the middle of the patella.

A pathognomonic feature (seen in about a third of cases) is so called "chicken-wire" calcifications investing the neoplastic cells.

A vague lobular architecture can be appreciated here.

Scattered multinucleated giant cells are common. The mononuclear cells have well-defined cytoplasmic borders, clear to slightly basophilic cytoplasm, and a round-to-ovoid nucleus with a longitudinal groove (although that is difficult to see here).

Fibrochondroid islands (upper left) are present. Again, the cartilage is pink rather than blue in this tumor.

Chondroblastoma is a rare benign chondroid-producing neoplasm that typically involves the epiphyses of long bones in young adults (when the growth plates are still open). 5-10% of cases occur in the temporal bone and calcaneus -- and these tend to occur in older patients (Folpe, Fletcher).

These tumors are usually curetted and thus, are received as fragments of grey-pink firm tissue. Histologically, the neoplastic cells are mononculear cells with pale abundant cytoplasm and eccentric nuclei that may exhibit nuclear grooves, admixed with multinucleated giant cells. The matrix is pink and fibrochondroid, but true bluish hyaline is not seen. The neoplastic chondroblasts are positive for S-100 and the multinucleated giant cells (from a different cell line) are positive for the histiocytic marker CD68.

One-third of tumors have delicate calcifications that surround the tumor cells in a so-called chicken wire pattern. This chicken-wire calcification is pathognomonic of chondroblastoma. One-third of the tumors also contain secondary aneurysmal bone cysts, but this feature does not affect prognosis (Fletcher).

Differential diagnostic considerations include giant cell tumor of bone (usually seen in skeletally mature individuals, plus GCT cells do not stain with S-100), primary aneurysmal bone cyst (unusual in the epiphysis and lack a sclerotic rim radiographically), chondromyxoid fibroma (almost never in the epiphysis, but in the metaphysis, exhibit a lobular growth pattern and tumor cells are stellate and lack nuclear grooves) and clear cell chondrosarcoma (presence of large clear cells and osteoid matrix and affects patients older than 40)(Folpe).

There is a slight male predilection and most are in their 20s. Clinically, patients often complain of pain, swelling and have impaired function. Radiographically, the classic changes are a well-circumscribed, ovoid lytic lesion with a thin, partially sclerotic margin. It is usually centered on the epiphysis but may extend into the metaphysis. The lytic region may show lobulation and contain radiodensities centrally, indicative of the chondroid matrix calcifications.

→The characteristic radiographic image is a lytic lesion with a sclerotic border centered on the epiphysis.

→Delicate "chicken-wire" calcification is pathognomonic for this tumor.