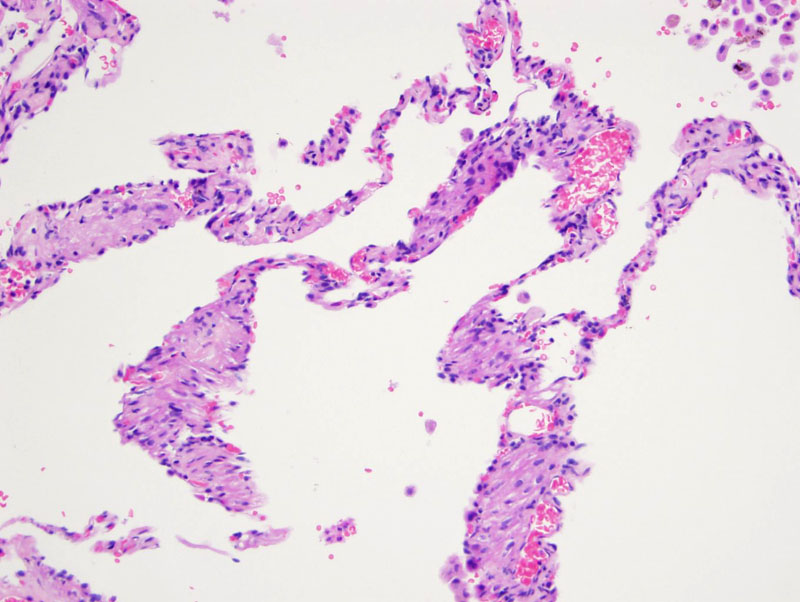 Cystically dilated air spaces result from the combining of damaged alveoli, eventuating in the development of cystic lung lesions and fluid-filled cysts in the lymphatics. Rupture of a cystic space may give rise to a pneumothorax, one of the complications of this disease.

Cytologically bland spindled cells proliferate and lead to thickening of the alveolar septae. Collections of hemosiderin laden macrophages are noted in some cases (not here).

The lesional areas are composed of modified smooth musle cells which can appear plump, with intervening collagen.

Lymphangio(leio)myomatosis (LAM) results from a proliferation of immature smooth muscle cells in the walls of airways, venules and lymphatic vessels in the lung. Proliferation of these cells results in narrowing of airways, obstruction, and eventual air trapping. The injured alveoli combine, leading to the development of cystic lung lesions and fluid-filled cysts in the lymphatics (lymphangioleiomyomas)

Lymphangiomyomatosis may arise sporadically or in association with tuberous sclerosis, an autosomal dominant tumor suppressor gene syndrome characterized by seizures, mental retardation, and tumors in the brain, heart, skin, and kidney. Mutations of the TSC2 gene on chromosome 16 is seen in sporadic lymphaniomyomatosis (Fletcher).

Grossly, the lung appears emphysematous in early stages and cystic with thickened septae in advanced stages. Microscopically, bland smooth muscle cells proliferate around bronchial lymphatics, interlobular septae and pleura (Fletcher). The perivascular epithelioid tumor cells stain with actin, desmin and HMB-45, which emphasizes the relationship with other HMB-45 positive tumors such as clear cell "sugar" tumors, angiomyolipomas and the so-called PEComas (Rosai). LAM occurs in reproductive age women and progesterone receptors have been identified in the tumor, but the exact role hormones play in pathogenesis remains unknown (Rosai, Fletcher).

Exclusively affects females in their reproductive years. Women complain of progressive dyspnea, respiratory insufficiency and occasionally pneumothorax. PFTs demonstrate an obstructive or mixed pattern with decreased diffusion capacity. Patients may also develop chylothorax or chylous pleural effusions as a result of the neoplasm involving the thoracic duct and its tributaries (Rosai).

CXRay may be normal or show diffuse reticular or miliary features throughout all lung zones with overexpansion. Ground glass opacities may be seen, which correspond to pulmonary hemosiderosis or a relatively diffuse proliferation of immature smooth muscle cells

No effective systemic therapy is currently available. Hormone therapy has been attempted but with little success. Lung transplantation is the only means of modifying the process.

LAM is generally a progressive disease that leads to respiratory difficulties and usually death within 10 years of diagnosis.