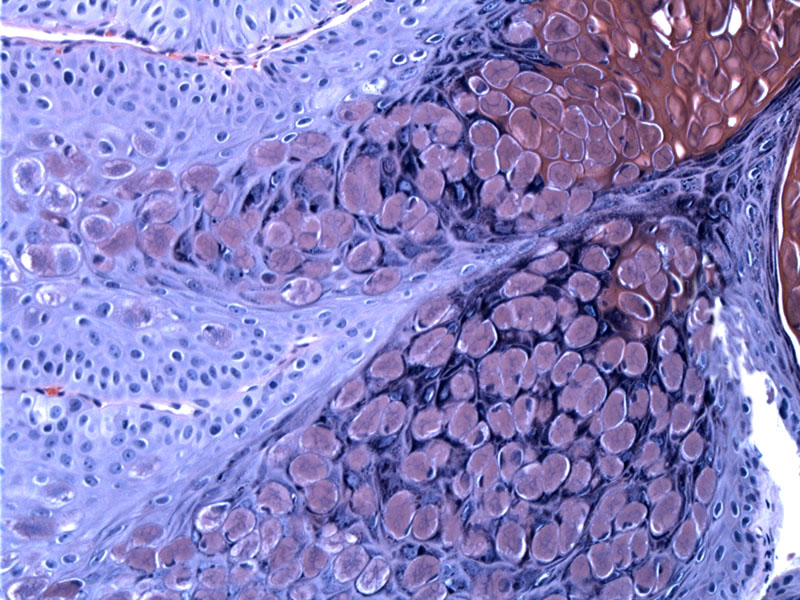 The epithelium is acanthotic and "cup-shaped" (endophytic growth of epithelial lobules). The pathognomonic finding is the presence of eosinophilic intracytoplasmic inclusion bodies (a.k.a molluscum bodies or Henderson-Patterson bodies).

Ruptured lesions may elicit a robust inflammatory response as seen here. In this image, the infected keratinocytes are sloughing off along with inflammatory cells.

Molluscum contagiosum is caused by a large DNA poxvirus and four subtypes have been described. Type 1 affects children predominantly and types 2 and 3 are seen in HIV patients (Busam).

Most often encountered in children and spread via direct contact or fomites. Presents as a pearly flesh colored domed papule with central umbilication. May also be sexually transmitted in adults. In immunocompromised individuals, these lesions can be widespread.

In children the lesions are normally left for spontaneous resolution to occur in a few months, but medical treatment may be indicated in adults. If only a few lesion are present they can

be treated by applying a topical agent such as podophyllin and salicylic acid.

→Caused by a pox DNA virus.

→Most often seen in children and spread by direct contact.

→May be seen in adults (sexually transmitted) or in immunocompromised individuals.