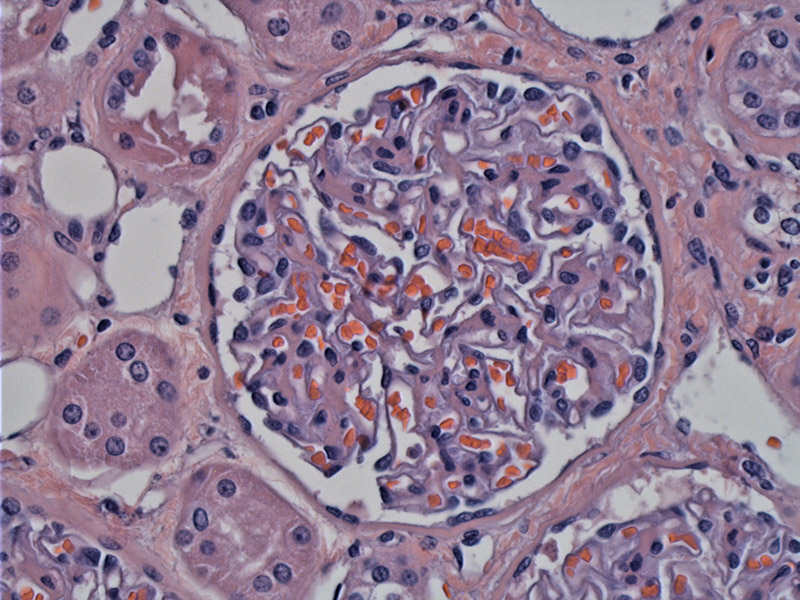 The round structure is a normal glomerulus, surrounded by a Bowman's capsule. The glomerular tuft has a thin basement membranes and a normal number of cells within the mesangium.

Cells within the glomerulus include endothelial, epithelial and mesangial cells. The capillary lumina are lined by endothelial cells (yellow arrow). The mesengial cells (green arrow) are embedded into the mesangium.

In this PAS stain of a normal glomerulus, an arrow points to a visceral epithelial cell nucleus (podocyte cell). The double sided arrow is within the capillary loop space.

The juxtaglomerular apparatus is demonstrated here, consisting of juxtaglomerular cells and the macula densa. The JG cells are modified smooth muscle cells in the wall of the afferent arteriole that elaborate renin. The macula densa (green arrow) are dark, closely packed cells that line the distal convoluted tubule; they are modified cells that respond to changes in NaCl concentration and volume of the filtrate.

The green arrow shows an afferent arteriole as it opens up into the glomerulus.

This image depicts two parallel arrays of medullary rays (top and bottom) with intervening normal cortex. The medulla is formed by a number of 'upside down' pyramids. The base of each pyramid is adjacent to the cortex and the tip of pyramid forms the papilla. Medullary rays, consisting of the straight portions of nephrons and collecting ducts, extend from the base of the pyramids into the cortex.

An image of the normal compact arrangement of tubules within cortex with a glomerulus is shown. The yellow arrow points to proximal convoluted tubules, which have a shaggy inner border due to numerous microvilli. The green arrow points to the straight (ascending) portion of a distal tubule, which are have less eosinophilic cytoplasm and no brush borders.

In this image of the medulla, one can see capillaries (with blood in their lumina), collecting tubules and although difficult to detect, segments of loops of Henle.

Proximal tubules are more numerous than distal tubules. They are lined with microvilli, have small uneven lumen and a single layer of cubodial cells with eosinophilic granular cytoplasm. Reabsorbtion of most substances from the glomerular filtrate takes place here.

The oval structure is an arcuate artery, located at the corticomedullary junction.

The renal pelvis is lined by normal urothelium (green arrow).

The kidneys are located in the retroperitoneum. They are protected by surrounding connective tissue with fat and skeletal muscle.

To form urine, the kidney undergoes three steps. First, blood is filtered. Next the kidney reabsorbs nutrients from the filtrate. Lastly metabolic waste products are excreted. Only 1% of the glomerular filtrate produced by the kidneys enters the bladder to be excreted as urine; 99% is reabsorbed (Eroschenko).