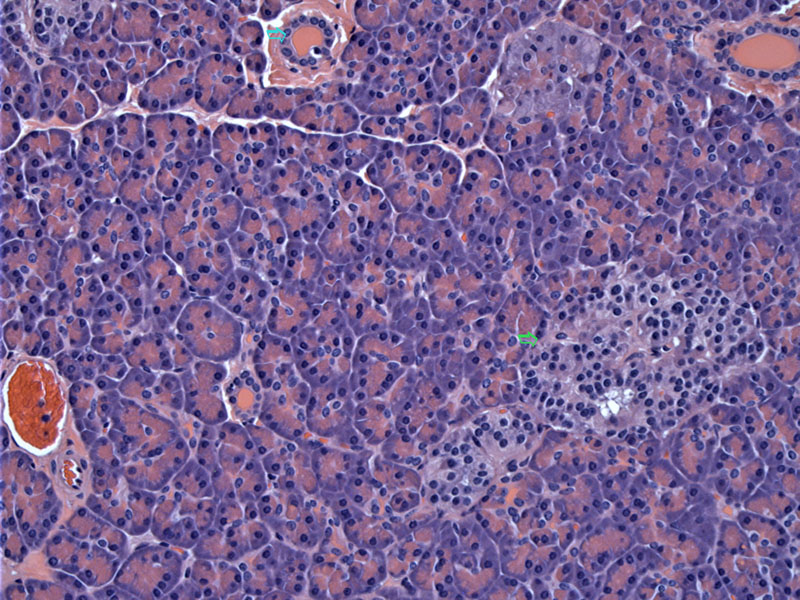 Yet another islet (green arrow). They are twice as numerous in the tail of the pancreas (compared to the head). The islet is surround by exocrine pancreas, which consists of closely packed acinar cells that appear darkly staining with abundant secretory granules in their apical surface. These granules contain zymogens, proenzymes in an inactive form, which are subsequently activated in the duodenum by enterokinase (produced by the duodenal wall). Specifically, enterokinase cleaves trypsinogen to form trypsin, which then activates all other proenzymes.

A closer view of the islet cells. The yellow arrow points to serous acini and the green arrow points to the periphery of the islet. The islet of Langerhans is invested by a delicate layer of connective tissue. Small capillaries containing red blood cells are seen within the islet. It is difficult to differentiate between the various cell types without special stains.

Again, the exocrine pancreas is shown -- secretory serous acini are arranged into small lobules and make up the majority of the pancreas. These cells have darkly staining basal portions and eosinophilic apices. Centrilobular cells are hard to detect; their presence is only suggested by nuclei protruding in the acinar lumina.

Interlobular ducts are lined by a single layer of cuboidal to columnar cells, surrounded by layers of connective tissue. The green arrow points to these cells.

The pancreas is an elongated organ posterior to the stomach. The head of the organ is nestled in the duodenal loop and the tail extends across the abdominal cavity to touch the hilum of the spleen. The pancreas consists of endocrine tissue and exocrine tissue.

Two hormones that regulate pancreatic exocrine function are secretin and cholecystokinin, both hormones produced by the enteroendocrine cells of the duodenum. Secretin stimulates exocrine pancreatic cells to produce large amounts of watery fluid rich in sodium bicarbonate ions. These ions neutralize the acidic chyme, stop the action of pepsin from the stomach and create a neutral pH in the duodenum for the action of digestive pancreatic enzymes. Cholecystokinin stimulates pancreatic acinar cells to secrete large amounts of digestive enzymes (amylase, lipase, deoxyribonuclease, ribonuclease, trypsinogen, etc.) that breakdown carbohydrates, fats, DNA, RNA and proteins. Of note, gastrin (secreted by endocrine cells of the pyloric mucosa) also stimulates the secretion of digestive enzymes.

The excretory ductal system starts in the center of individual acini as unique centroacinar cells, seen protruding into the acinar lumen. These continue as intercalated ducts which merge to form interlobular ducts that empty into the main pancreatic duct. The ductal system functions as a conduit for the transport of acinar cell secretions.

The endocrine pancreas is scattered throughout as islets of Langerhans. These islets are surrounded by fibers of reticular connective tissue. Within the islet there are four cell types, each producing a different hormone. The two major hormones are produced by alpha and beta cells. Alpha cells are located around the islet periphery and make up 20% of the islets. Alpha cells produce glucagon which is released to elevate blood glucose. Beta cells are found in the islet center and make up 70% of the islet. These cells produce insulin which lowers blood glucose levels when necessary.