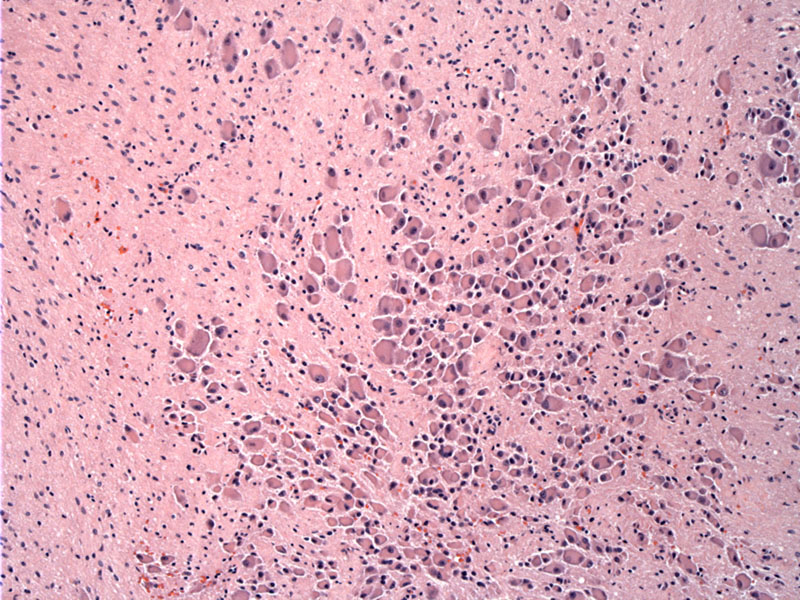 There are many Schwann cells and mature ganglion cells in clusters. Nissl substance is easy to recognize. Care must be taken to look for neuroblastomatous elements and rule out intermixed ganglioneuroblastoma (read below).

Stromal calcifications are not uncommon.

Neuroblastic tumors are of neural crest origin and can arise in the adrenal gland or other locations where sympathetic ganglia exist such as the posterior mediastinum or retroperitoneum. From the least mature to the most mature, the neuroblastic tumors are ganglioneuromas, ganlgioneuroblastomas and neuroblastomas. The way to determine which category the tumor falls into depends on two factors: (1) amount of Schwannian stroma and (2) presence of mature ganglion cells.

Neuroblastoma and nodular ganglioneuroblastomas are further subclassified into prognostic groups by a complex interplay of factors including age of patient (less than 1.5 years of age is favorable), mitosis-karyorrhexis index (calculated by the number of mitotic figures and karyorrhectic bodies per 5000 cells), favorable histology (abundant Schwannian stroma, maturing ganglion cells) and cytogenetics. Greater than 10 copies of n-MYC indicates a more aggressive tumor. Loss of chromosome 1p, 14q deletion, 11q deletion and gain of 17q are also unfavorable.

Tumors are usually asymptomatic, allowing them to grow to substantial size. They are rather slow-growing.

→Rare or absent neuroblasts (and presence of mature or maturing ganglion cells) renders the diagnosis of ganlgioneuroma.