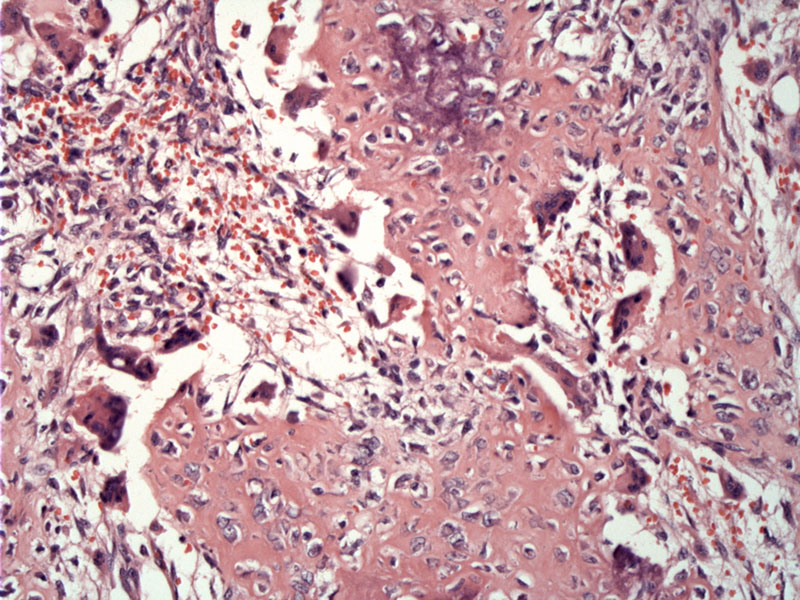 Osteoblastoma (giant osteoid osteoma) is a bone-forming tumor composed of neoplastic osteoblasts that elaborate trabecular woven bone. It can arise in any bone, but the most common locations include the posterior spine (32%), femur (12%), tibia (10%) and foot/ankle (9%)(Folpe). It can be found within the cortex, medullary, or periosteal tissues.

On imaging, the lesion is round and often radiodense. By definition, it is greater than 2cm (as compared to 1-2cm for osteoid osteoma). Grossly, the appearance is red and granular with cystic change and hemorrhagic. The tumor is often surrounded by sclerotic bone.

Several variants exist including cystic (large cystic change), cartilaginous (areas of hyaline or chondro-osseous cartilage), pseudomalignant (stromal cells exhibit degenerate atypia) and aggressive forms. The aggressive variant is controversial. Some authors do not believe that it is a separate entity. Microscopically, it is composed of enlarged osteoblasts with an epithelioid appearance, with abundant cytoplasm and vesicular nuclei. It is locally aggressive, but does not metastasize (Folpe, Fletcher).

Occurs in any age group but in particular those in the 2nd through 4th decades of life. More common in males (3:1). Usually presents with local pain and a tender mass may be palpable. The clinical presentation and imaging can appear aggressive and elicit concern for malignancy.

Curettage is the most common treatment and recurrence is about 10% to 20% (Folpe).

Benign although there is some debate regarding the so-called aggressive variant. Malignant transformation is extraordinarily uncommon.

→Essentially identical to osteoid osteoma except for larger size (>2cm).