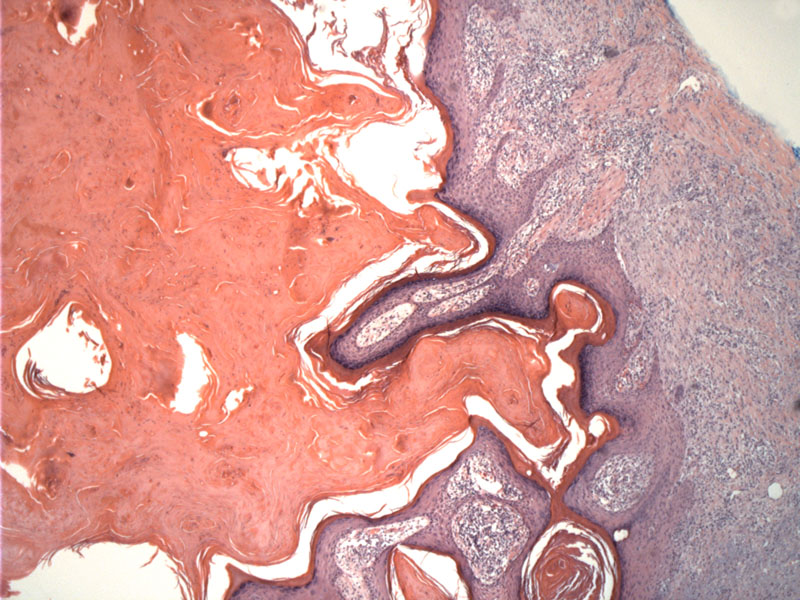 Grossly, keratoacanthomas form large nodules with a central keratin plug. Histologically, there is a proliferation of epithelium (almost verrucoid) and a central crater filled with keratin. The keratinocytes are well-differentiated and can be pale or glassy. Squamous pearls can be found. Atypia is minimal (Rapini, Busam). The epidermis tends to be verrucoid appearing.

The central crater is filled with abundant keratin.

The keratinocytes in the epidermis are well-differentiated and exhibit minimal atypia.

Keratoacanthoma (KA) is a crateriform or cup-shaped squamous proliferation. The behavior of KAs is usually indolent. They erupt rapidly over a few weeks on sun-exposed skin (face and forearms are common sites) and tend to involute spontaneously in 3-6 months. Associated risk factors are similar to those of squamous cell carcinomas and include UV light exposure, HPV and immunosuppression (Busman).

Some pathologists prefer to designate them as a variant of squamous cell carcinoma due to their uncertain biologic behavior. Rare cases have been known to metastasize and behavior aggressively.

→Characteristically erupts over a few weeks and spontaneously resolves of a few months.