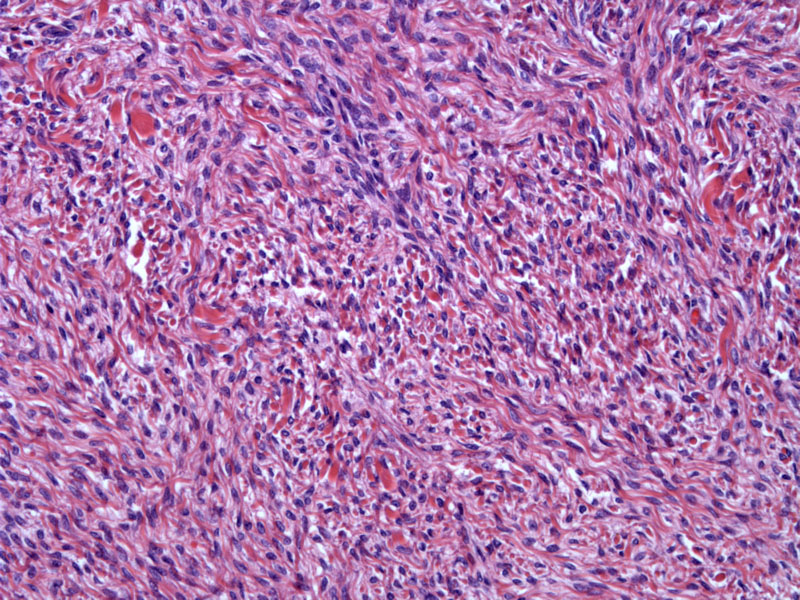 Dense short spindle cells with scant intervening collagen fibers comprise this tumor. Mitoses and atypia are lacking. The cells may contain small amounts of lipid but without an Oil-red-O stain, it is impossible to detect. These tumors stain for vimentin and are negative for EMA, CEA, and keratin, in accord with their stromal nature.

Other tumors show confluent stromal cells which are short and arranged in parallel.

The tumors designated thecoma and fibroma are both benign stromal tumors of the ovary. Thecoma is composed of lipid-containing cells resembling theca interna cells, while fibroma is entirely or almost entirely of spindle, oval, or round cells from variable amounts of collagen. Because of histological and immunohistochemical overlap, differentiation between thecomas and fibromas is often imprecise; therefore, the term "fibrothecoma" is frequently applied to such tumors.

Fibrothecomas ara unilateral benign stromal ovarian tumors, with a predilection for the left ovary (70%). Most often they arise in middle-aged women, and are rare in children. They may be detected incidentally for other reasons, or due to symptoms relating to torsion. A very small percentage (2%) of ovarian fibromas present with Meigs syndrome, which features a fibroma or thecoma accompanied by ascites and hydrothorax, in which removal of the tumor results in cure.

Treatment is with excision, typically with oophorectomy.