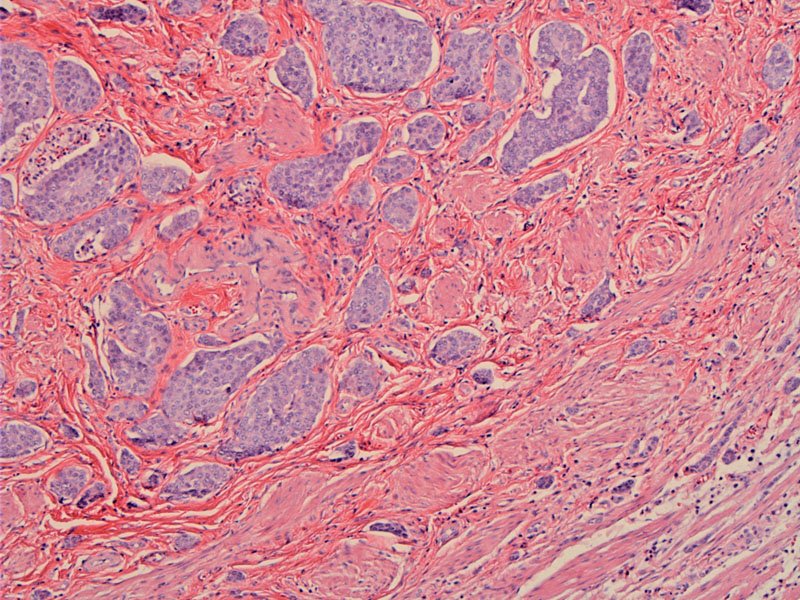 Irregular islands of tumor cells dissect through the muscle layer (of the appendiceal wall).
IMAGE DESCRIPTIONS

There are irregular medium-sized nests of uniform round cells dissecting into the muscular wall of the appendix.

A different case shows a nested proliferation of bland cells with pale cytoplasm immediately under the acute inflammation of appendicitis.

The cells resemble histiocytes almost, as they are degenerating amongst the inflammation and hemorrhage of an acute appendicitis.

Another area shows that this is clearly a neoplastic process. The round to slightly jagged nests contain cohesive cells with a moderate amount of light pink to pale cytoplasm. The neuroendocrine nature of the lesion is more apparent here.

Deeper within the wall one finds many lymphovascular channels with carcinoid within them.

These tumors are often located at the tip of the appendix, sometimes obliterating the lumen. After fixation, they have a yellow color and are quite firm due to desmoplasia. Histologically, neoplastic cells with round nuclei and "salt and pepper" chromatin are arranged in islands, cords and sheets (Fletcher). Invasion of the muscle wall, lymph vessels and extension to the peritoneal surface are not uncommon (Rosai).

They can occur at any age with a peak incidence in the 3rd and 4th decade. Mostly, appendiceal carcinoids are incidental findings and the large majority are less than 1 cm in size (Rosai). The tumors are found in 0.3–0.9% of patients undergoing appendectomy (In't). Rarely, they may be associated with acute appendicitis due to obstruction of the lumen.

The behavior of the carcinoid depends on the anatomic site, depth of invasion, size and histologic features of necrosis and mitotic activity (Kumar). For example, appendiceal and rectal carcinoids rarely metastasize despite extensive local spread, whereas the majority (90%) of ileal, gastric and colonic carcinoids that have penetrated halfway through the muscularis will have metastasized.

Metastasis is rare, and if seen, are usually due to tumors exceeding 2 cm in diameter. Carcinoid syndrome secondary to appendiceal carcinoids is also exceptionally rare and usually secondary to liver metastasis (Rosai).