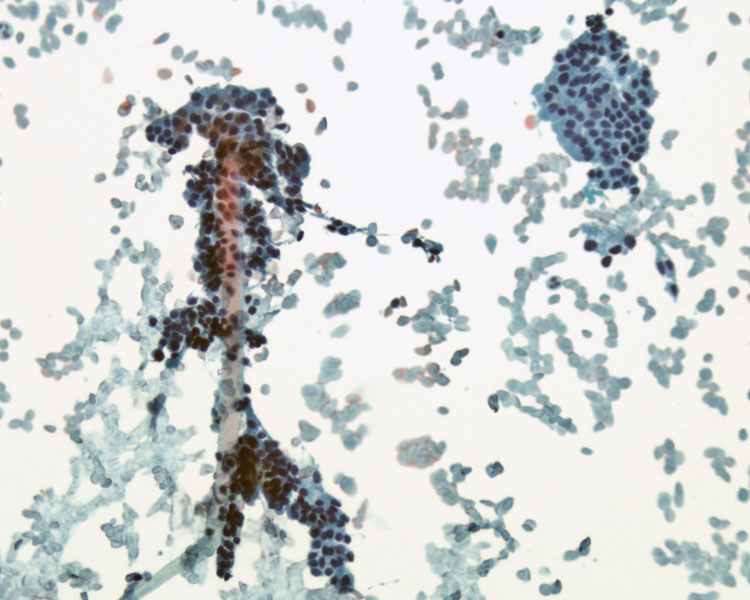 The cells in the honeycomb are relatively small, with small round nuclei containing uniform dense chromatin.

Hemosiderin laden macrophages are an indication of a cystic component with secondary hemorrhage.

Diff-Quik stain best highlights the background which shows watery colloid, which was not well demonstrated on the FNA Pap stain.

Another area on the slide shows more convincing metachromatic colloid and a honeycomb sheet of follicular cells. Metachromasia is defined as taking on different color than the original dye because of certain properties that interact with the dye.

There is marked variability in the follicle size, with smaller ones admixed with macrofollicles.

Secondary changes such as hemorrhage, cystic degeneration and reactive fibrosis are common within a multinodular goiter. The area of hemorrhage contains hemosiderin-laden macrophages, which were demonstrated previously on the FNA .

Keep in mind that sometimes these lesions may acquire papillary features due to infolding of epithelium, but fibrovascular cores and nuclear features of papillary carcinoma are lacking.

The colloid nodule forms the building block of diffuse (simple) or multinodular goiters. A diffuse goiter is characterized by a diffuse enlargement of the gland. It is composed of follicles filled with colloid, and thus, another term is called a colloid goiter. Diffuse (simple) goiters can be endemic or sporadic.

Endemic forms arise in countries where iodine deficiency is common. The pathogenesis involves impaired thyroid hormone production, which leads to increased TSH and its sequelae (proliferation of the follicular epithelium and increased thyroid mass)(Thompson). Sporadic forms are less common, generally affecting young women and in many cases, the cause is unknown (Kumar).

Diffuse goiters may progress into multinodular goiters, which may be nontoxic or toxic i.e. toxic multinodular goiter. In some cases, an autonomous nodule may form, leading to hyperthyroidism a.k.a. Plummer syndrome. The ophthalmopathy seen in Graves disease is not part of Plummer syndrome. Not to be confused with Plummer-Vinson syndrome (dysphasia, glossitis, iron deficiency anemia).

Histologically, follicles of varying sizes are seen -- some follicles are huge and others are small. The follicles are lined by columnar cells, which may be piled up and form papillary-like projections (Kumar).

Affects a wide age range, but most common in adulthood. Predilection for females with a F:M ratio of 8:1. Most patients are euthyroid, however, some develop hyperthyroidism ("toxic nodular goiter"). The nodules are usually multiple and there may be one dominant nodule. If they become large, it may compress adjacent structures to produce dysphagia and hoarseness.

Benign. There is no increase of thyroid malignancy in patients with multinodular goiters (Thompson).

→A colloid nodule is the building block for either a diffuse nontoxic (simple) goiter or a multinodular goiter.

→Multinodular goiters can be nontoxic or toxic, causing thryotoxicosis.

→Malignancies can hide within a multinodular goiter, so sample carefully and thoroughly.