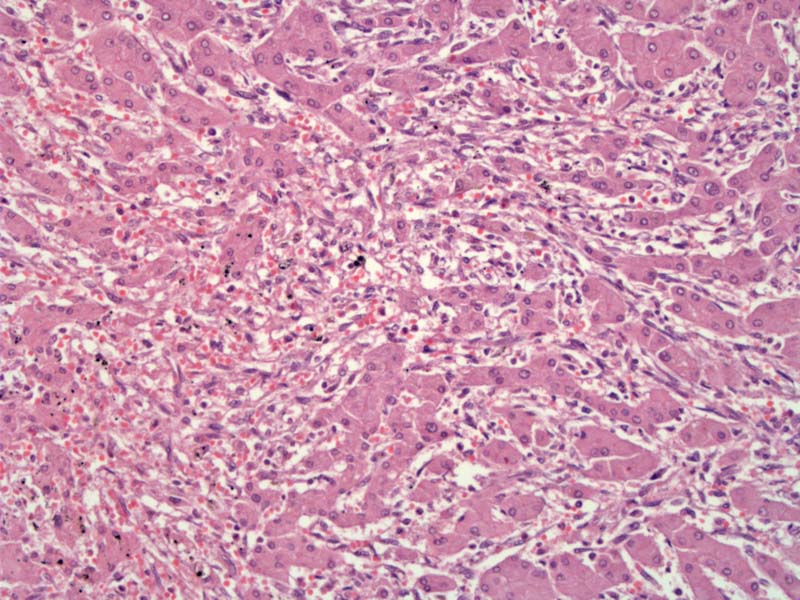 Part of the liver parenchyma is irregularly infiltrated and replaced by slender malignant endothelial cells forming narrow vascular channels. There may be a variety of growth patterns including sinusoidal, solid, papillary and cavernous. The sinusoidal pattern is most distinctive with expanded sinusoids lined by endothelial cells and may represent an early phase of the tumor. Eventually, the tumor transitions to a more solid and papillary pattern with fascicular growth of spindled cells. Bizarre multinucleated cells and nuclear pleomorphism are common features (not seen here)(Fletcher).

The solid proliferation is composed of spindle cells with many intervening red blood cells. Residual hepatic cords can be seen. Proliferation of endothelial cells can compress the hepatic cords and cause hepatocyte atrophy (Iacobuzio). Endothelial markers such as CD31, CD34 and factor VIII-related antigen highlight the malignant endothelial cells. Poorly-differentiated tumors may have patchy staining, however.

The spindle cells have unequivocal nuclear pleomorphism and hyperchromasia. In cases of thorotrast exposure, granules of refractile pink-brown deposits may be seen in the Kupffer cells (Fletcher).

Grossly, angiosarcomas are hemorrhagic, often large with indistinct borders. Blood-filled spaces of varying sizes can be seen. Satellite nodules are common -- both lobes and usually the spleen are involved by the time of diagnosis (Iacobuzio).

Risk factors include cirrhosis, exposure to vinyl chloride (a component in PVC), exposure thorotrast (a substance used for radiographic imaging) and exposure to arsenic (Fletcher, Rosai). The latency period following exposure can be many years. It is noted, however, that up to 75% of cases have no identifiable risk factor (Fletcher).

Resection is the treatment of choice, but prognosis is grim with a mean survival of 6 months.