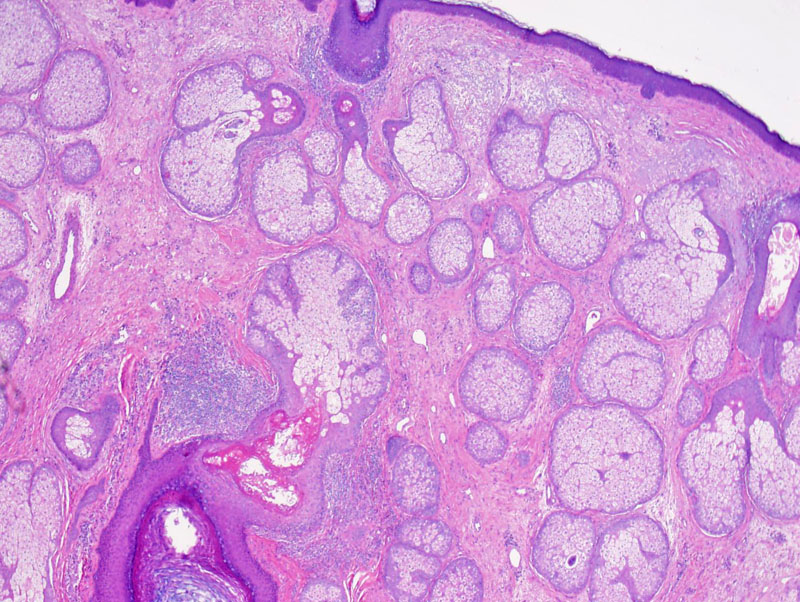 Case 1: A low power view shows marked sebaceous hyperplasia filling the superficial dermis. While this is not pathognomonic of rosacea, it is a finding that is frequently found in biopsy specimens, especially the phymatous variant.

This image depicts a damaged follicle likely resulting from an acute folliculitis or follicular pustule that is commonly seen in rosacea.

A high power image shows periadnexal inflammation. While it is difficult to depict in this image, the infiltrate is commonly composed of lymphocytes and histiocytes. Occasionally plasma cells and multinucleated giant cells may be present.

This cross section of a follicle betters shows the periadnexal inflammation. Some lesions may be granulomatous.

Most people think of the rosy red cheeks when they hear the term rosacea. However, rosacea is a much more complicated entity with a classification system consisting of four different sub-types: erythematotelangiectatic (vascular), papulopustular (inflammatory), phymatous and ocular. There is still a lot of debate and theory about the etiology and pathogenesis of rosacea, especially given the variation in clinical presentations.

The classical clinical presentation of rosacea is the presence of erythema and telangiectasia of the face, primarily the cheeks, forehead, chin, and around the nose. While rosacea is most common among fair-skinned individuals, it can affect any race. As mentioned above, the four sub-types can have a highly variable presentation.