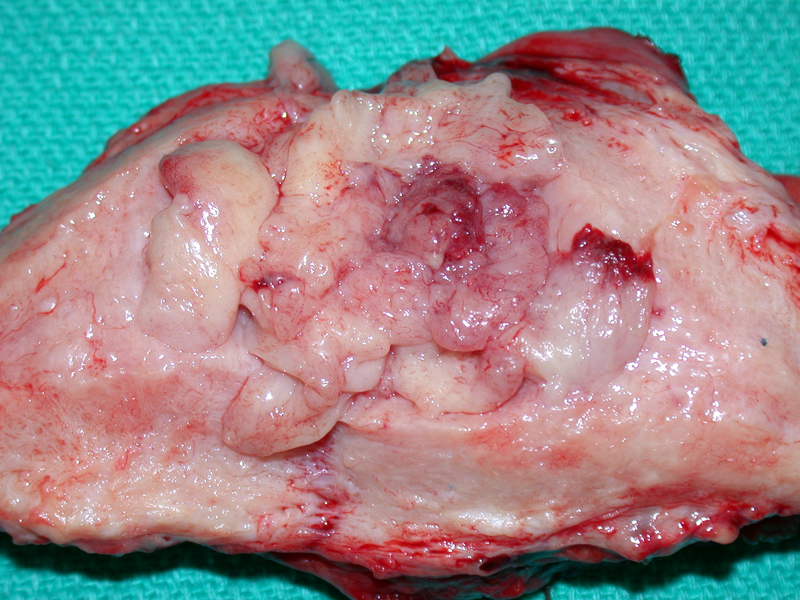 The uterus is bisected and opened, with the fundus at the top of the image facing you. Note the polypoid mass at the fundus, which proved to be FIGO I adenocarcinoma.

The interface between the tumor (light tan) and adenomyosis (swirled bundles underlying the tumor is demonstrated. There is no overt invasion.

This is an example of FIGO Grade 1 endometrioid endometrial carcinoma. Note that the glands are well-formed, and this tumor had less than 5% of solid (non-squamous) growth.

Another image of FIGO Grade 2; this tumor had approximately 40% solid component. Note the necrotic debris inside the glandular lumen, which is a common finding.

This is another tumor with FIGO Grade 2. The glands are poorly formed. The epithelial cells are pleomorphic with somewhat vacuolated cytoplasm.

Endometrial carcinoma can show mucinous differentiation. Note the blue tinge to the cytoplasm.

Basal vacuoles as seen in the secretory phase of the normal endometrium are seen, consistent with secretory differentation in endometrial adenocarcinoma.

This endometrioid carcinoma is FIGO 3 and shows gross evidence of myometrial invasion.

Note the irregular infiltrative border of the tumor (pale tan) with myometrium on this cross section.

Now, we shall demonstrate a case of FIGO 2 -- an initial endometrial biopsy showed areas of confluent growth (note that if you only saw this field, you might think FIGO 3, but you must take the entire specimen into consideration).

High power shows the nuclear features of endometrioid adenocarcinoma. Note the pseudostratification and fairly good orientation of the nuclei perpendicular to the basement membrane.

Comparision chart of type I and type II endometrial carcinoma.

Endometrioid endometrial adenocarincomas recapitulate the glandular pattern found in normal endometrium. The epithelial (glandular) cells are larger than those in secretory endometrium and demonstrate mild to moderate pleomorphism. Nucleoli may be prominent -- frequent mitotic figures and apoptotic bodies are found. Foci of necrosis are not uncommon. Stroma is desmoplastic with a variable inflammatory infiltrate.1

The FIGO grading system is based on the amount of solid growth.

Note that for type II (ie. serous) carcinomas, grading is unnecessary as these neoplasms are very aggressive and are automatically managed as grade 3 carcinomas.

Endometrial adenocarcinoma generally presents with abnormal uterine bleeding. Classically, it was thought to be very rare in women younger than 35 but the epidemic of obesity the world is experiencing has seen more and more positive biopsies in young women.

Uterine cancers are staged surgically with a total hysterectomy, bilateral salpingo-oophorectomy, pelvic washings, and pelvic and peri-aortic lymphadenectomy. Depending on recurrence risk, patients may be administered radiation therapy in the form of vaginal cuff brachytherapy or whole pelvic radiation. Several trials using platinum based chemotherapy are underway for treating advanced disease.

Note that the overall 5-year survival for type I carcinomas is 85-90%, and 30-70% for type II carcinomas as they are inherently more aggressive tumors with early and extensive extra-ovarian spread.1

There are two major categories of endometrial carcinoma (EC). Type I and type II.

Endometrioid adenocarcinoma is the prototype for type I EC, which has unopposed estrogen exposure as a risk factor and hyperplasia as a precursor lesion.

3 O'Neill CJ, McCluggage WG. p16 expression in the female genital tract and its value in diagnosis.