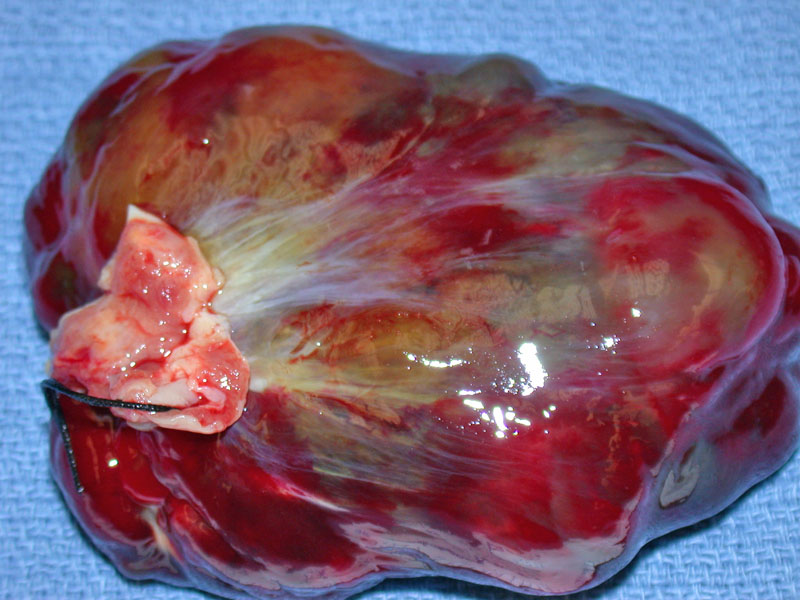 A globoid thinly encased mass attached to the endomyocardium comprises this atrial myxoma. There is extensive hemorrhage.

Hemorrhage is universally found within a myxoma. Although the tumor is dissected by hemorrhage, one can still pick out the myxomatous matrix (blue and frothy) and the myxoma cells within the matrix. Hemorrhage is thought to be a direct consequence of the mechanical trauma due to this tumor's mobility.2

This image demonstrates a more diagnostic area of the tumor with stellate myxoma cells in a mxyomatous background. Mitoses are not present this tumor and if found, another diagnosis must be considered.

Again, this image demonstrates evidence of past hemorrhage with extensive Gamma-Gandy bodies and hemosiderin-laden macrophages.

Longer standing myxomas develop significant fibrosis. If significant, the underlying nature of the lesion can be difficult to identify.

Dilated glands are seen in clusters within this other case of atrial myxoma. Many glands show an attenuated lining, but other glands are lined by cuboidal or columnar cells (as seen below). This finding of glandular structures although characteristic of atrial myxomas, is seen in less than 5% of cases. Note the more typical area (upper right corner) consisting of singular myxoma cells dispersed in a background of myxoid stroma.

Other glands are lined by columnar cells with well-developed apical mucin.

The majority of tumors found in the heart are metastatic and primary tumors are fairly rare. Of the primary tumors of heart, myxomas are by far the most common. Although these tumors can occur in any of the four chambers including heart valves, they have a definite predilection for the atria, especially in the left atria near the fossa ovalis. Hence the commonly used term atrial myxomas.

Grossly, the mass can be sessile or pedunculated (connected to the atrial wall by a fibrous stalk). In its pedunculated form, the tumor can bob up and down through the AV valves during ventricular contractions and cause periodic obstruction. The tumor can also bounce against the valves, causing mechanical damage.1

Cardiac mxyomas are composed of a cellular component set against a myxomatous background. The cellular component consists of several types of lesional cells, all of which are thought to be derived from a primitive multipotent mesenchymal stem cell. The most prominent tumor cell is the mxyoma cell, also known as the lepidic (Gr: scales) cell because polyheydral mxyoma cells can resemble scales.2 The mxyoma cells can also have a fusiform or stellate morphology.

Palpitation, fever, and weight loss are the most frequent symptoms of cardiac myxomas, but cerebrovascular accident or peripheral arterial embolism are also seen. Systemic embolism is encountered in 30%-45% of cases . In individuals over 75 years of age, myxomas are most often nonobstructive, well-circumscribed, calcified tumors, with a low risk of obstruction or embolism. It has been suggested that only independent predictor of systemic embolism in left atrial myxoma is the polypoid nature of the lesion.

Carney's syndrome, also known as "familial endocrine myxolentiginosis", has a complex manifestation, but it will be enough to remember the following lesions: (1) multiple cardiac and extra-cardiac (especially cutaneous) myxomas, (2) spotty skin pigmentation (especially blue nevi) and (3) endocrine overactivity (pituitary tumors or microadneomas of the adrenal gland).

Surgery is the treatment of choice. The superior transeptal approach has been reported to be an excellent approach with a nice surgical view to expose and remove a left atrial myxoma.

Benign. Rarely, the tumor can recur and thus, excision with a wide margin is recommended. Another rare complication is embolization (ie. from the left atria to the internal carotid artery).