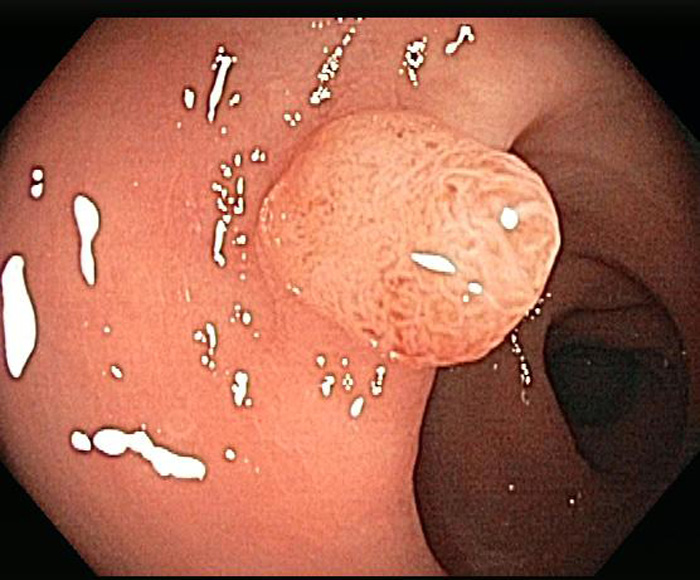 A tubulovillous adenoma is seen on colonoscopy.
IMAGE DESCRIPTIONS

A sessile tubulovillous adenoma is seen in colonoscopy.

Post-snare shows the base formerly occupied by the polyp, now completely excised.

The epithelium can be mildly, moderately or severely dysplastic. In this image, the epithelium is only mild dysplastic, as the cells retain their polarity.

Architecture complexity can be appreciated in this image, such as branching glands. This area is consistent with tubulovillous architecture

Villous adenomas tend to be larger and more sessile compared to tubular adenomas. In large villous lesions, the tumor may involve the entire circumference of the bowel wall, like a shaggy carpet. Severe dysplasia is more commonly found in villous adenomas, thus, noting villous histology in a pathology report is important and carries prognostic significance. However, the pathologist must keep in mind that high-grade dysplasia may be found in all subtypes of adenomas.

Microscopically, finger-like projections (villi) are covered by adenomatous epithlium that range from mild to severe dysplasia. Because the lesion is sessile, invasion will occur directly into the bowel wall without the 'buffer' of a stalk (as in penduculated adenomas).

Villous adenomas tend to be larger than tubular adenomas and tend to arise in older individuals. The most common sites are the rectosigmoid colon and rectum, but can be anywhere in the large colon. On colonscopy, they appear as sessile, velvety, cauliflower-like masses, and may be up to 10 cm in diameter.

The risk of malignancy for an adenoma correlates with size, presence of villous architecture and severity of dysplasia.