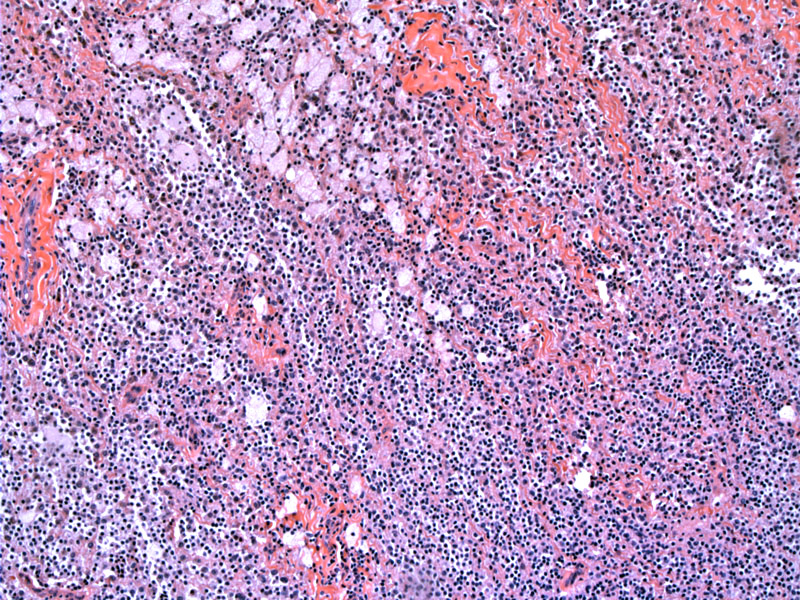 Areas of collagen with admixed inflammation are seen, again with numerous foamy macrophages. Brown pigment (hemosiderin) in macrophages is what gives rise to the term

This different case of PVNS demonstrates diffuse growth with a somewhat villonodular appearance on low power. A villous 'shaggy' appearance is often seen on the gross resected specimen as well.

Multinucleated giant cells, foamy histiocytes, chronic inflammatory cells and rounded stromal cells are embedded in a fibrous stroma. Although hemosiderin is usually present in PVNS, hemosiderin is not prominent in this case.

This different case shows prominent villous formations, hence that part of the entity's name. Hemosiderin and vessels are also prominent.

Pigmented villonodular synovitis (PVNS), also known as giant cell tumor of tendon sheath - diffuse type and tenosynovial giant cell tumor - diffuse type is a rare condition that affects the synovium in young and middle-aged adults. In contrast to the localized form, which is encapsulated, PVNS is unencapulated and extends into the surrounding soft tissues.

Although regarded as a "benign" lesion, it may be locally destructive and eventuate in significant joint morbidity. PVNS usually involves the large joints with the knee, ankle and foot as the most common locations. In contrast, the localized form has a predilection for the smaller joints, particularly the fingers.

Note that 60-70% of localized and diffuse giant cell tumor of tendon sheath contain the gene fusion product COL6A3-CSF1, which favors a neoplastic process versus a reactive process.1

Much less common compared to the localized form. Median age is 41 with a slight female predominance. Patients frequently present with pain, joint effusions, and swelling of variable duration. MRI is useful to identify PVNS, which exhibits low signal intensity on both T1 and T2 sequences.

40-50% develop local recurrence after excision. These lesions are locally aggressive but do not metastasized. Note that there is a malignant form of PVNS reported in the literature which metastasize, however, this entity is contentious and exceedingly rare.