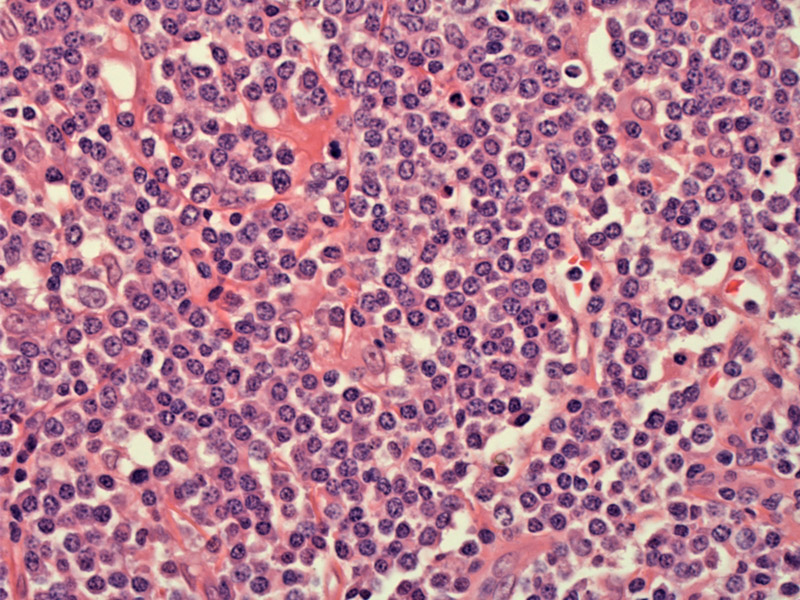 A diffuse loose aggregation of plasma cells are seen, which can be well-differentiated (indistinguishable from normal plasma cells) to poorly differentiated with pleomorphic morphology. Binucleate morphology can be prominent, and if they comprise >5% of the neoplasm, it can indicate proliferation (Brandwein). The presence of distinct perinuclear hofs and clock-face chromatin easily characterize this lesion as plasma cell in type.

This particular case of extramedullary plasmacytoma arose in the parotid gland. The bottom right shows atrophic skeletal muscle, where the tumor has expanded outside the parotid into adjacent tissues.

Plasmacytomas can occur as a solitary lesion, usually seen in younger patients, or in conjunction with multiple myeloma seen in older individuals. Extramedullary plasmacytomas can occur in any anatomic site, but 80% of cases are found in the upper aerodigestive tract such as sinonasal passages (Fletcher, Brandwein).

More common in men and although it can occur at any age, most individuals are over 40. Extramedullary plasmacytomas have a predilection for head and neck (sinonasal tract, nasopharyx, larynx, oral cavity and salivary glands). Serum electrophoresis may be helpful in diagnosis as it may show a monoclonal gammopathy (Fletcher).