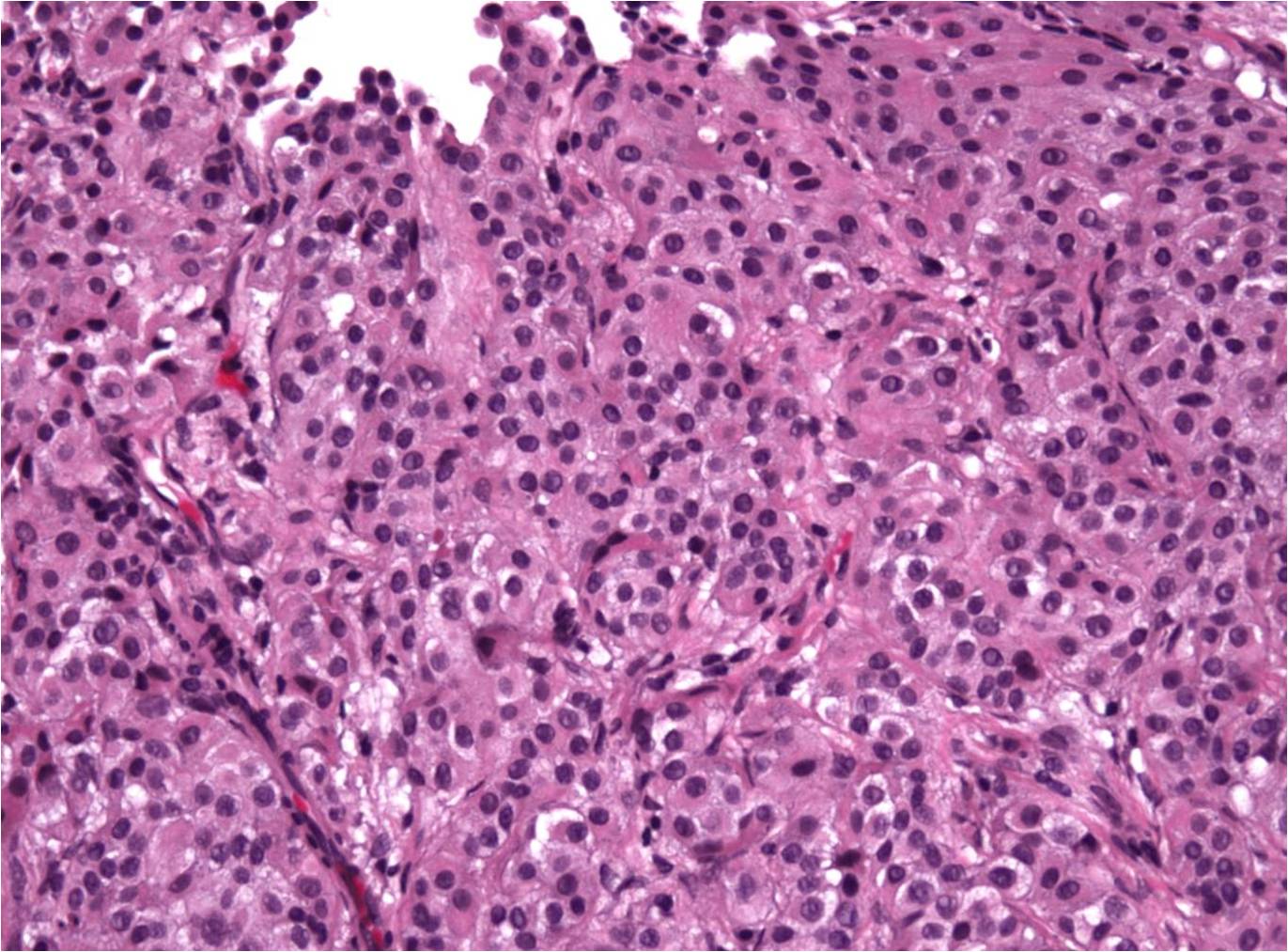 Other areas of the TUR specimen showed microcystic change and possibly some abortive tubule formation. Note that while the nuclear features are bland, the lesion has a disturbingly infiltrative appearance towards its deeper aspect. The possibility of von Brunn nests and cystitis cystica is raised.

After neoadjuvant chemotherapy this restaging TURBT again contains nests of bland apprearing cells. There appears to be more size variability in this specimen, bu post-chemotherapy it is important to note that the nested architecture and cytologic blandness are largely preserved.

There are also small foci of conventional transitional cell carcinoma, seen here (adjacent to the predominantly nested pattern). In general, up to 20-30% of more conventional areas are allowed, but one needs a predominance of the nested pattern in order to diagnose nested variant.

This is a post-therapy pelvic exenteration of the tumor. The bladder demonstrated a flat, approximately 1.5 by 2.0cm yellow-tan lesion on the left posterolateral wall. The lesion extended into the muscularis propria but at least grossly did not involve the perivesicular fat.

It also appears nested when it metastasized to the regional nodes.

Here is microscopic tongue of invasive tumor extending into the perivesicular fat, placing the stage at T3a. In this variant it is not uncommon for the resection to be staged higher than the prior biopsy

The stroma surrounding the tumor cells can range from densely collagenous, to loose and myxoid. This deep section in the perivesicular fat shows the tendency of this tumor to have increasing atypia in the more deeply invasive components.

Review of the histological features of the nested variant of transitional cell carcinoma.

In a recent study of 30 nested urothelial carcinomas, the patient age averaged 63 years with a male-female ratio of 2.3:1. The authors found that the deep tumor-stroma interface was always jagged and infiltrative and 90% of the tumors demonstrated at least focal cytologic atypia. When compared to pure high-grade urothelial carcinoma, the nested variant was more likely to demonstrate muscle invasion, extravesical disease and metastatic disease (Wasco).

This variant often presents at an advanced stage and tends to have a persistent and progressive clinical course. Reports of outcome are variable and are confounded by the small number of cases and the lack of comparative analyses with conventional urothelial carcinoma. In the aforementioned study conducted by Wasco, the 30 patients were followed for approximately 12 months post-treatment -- 3 patients (10%) died of disease, 16 (55%) are alive with persistent or recurrent disease, and 10 (34%) are alive without disease.