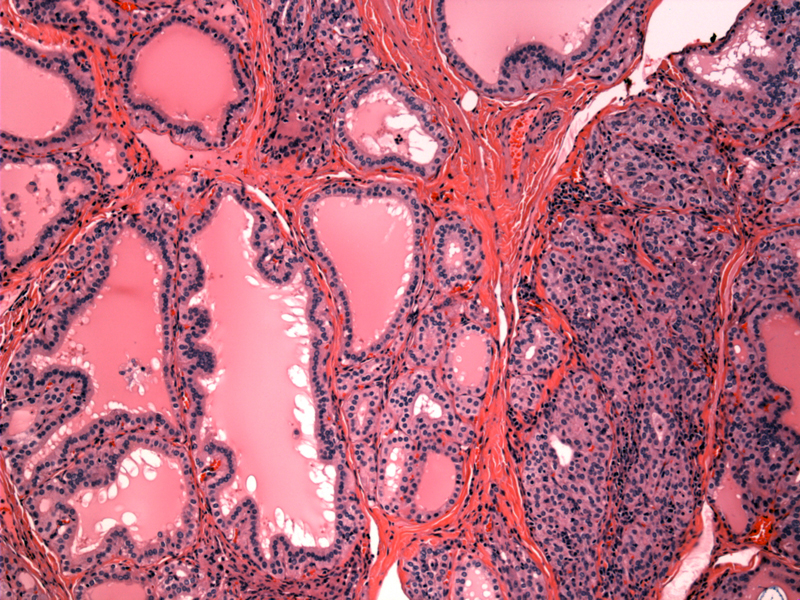 The follicles in Graves disease are hyperplastic.
IMAGE DESCRIPTIONS

Case 1 - The overall picture of Graves disease is that of hypercellularity. The follicles are numerous and hyperplastic. Note the serrated outlines of the larger follicles. These serrations and undulations result from the crowding and overgrowth of epithelial cells that can no longer fit in a circumscribed space.

Note the crowded appearance of the follicular epithelium.

Case 2 - Another patient shows extensive scalloping of the colloid, seen as clear spaces along the periphery of the follicles. As a result of hyperfunction, the colloid (supply of thyroglobulin) is actively absorbed, thus, there is less colloid inside the follicle. During fixation, the colloid retracts and creates vacuoles or areas of clearing between the colloid and the follicular epithelium, imparting this feature.

The redundancy of the follicular wall gives rise to papillary infoldings.

Tall columnar cells line the follicles, which have an irregular and undulating outline. Note again the hypercellularity and crowding of the epithelium.

Increased height of the epithelial columnar cells is seen, along with eosinophilic cytoplasm reminiscent of oncocytic change. There is no colloid in the lumen of these crowded and compressed follicles.

Graves disease and Hashimoto thyroiditis are both autoimmune thyroid disorders that lie on opposite ends of a spectrum. Graves represents thyroid hyperfunction, and Hashimotos represents thyroid hypofunction. Graves disease can be superimposed on Hashimoto causing a condition known as "hashitoxicosis" (areas of hyperfunction in a background hypothroidism), or Graves can develop into Hashimotos (hyperthyroidism evolving into hypothyroidism). In certain kindreds, there is the co-existence of both Hashimotos and Graves.1,2

Thus not surprisingly, Graves and Hashimotos share certain features such as a vigorous lymphocytic infiltrate and an association with other autoimmune diseases such as systemic lupus erythematous, type I diabetes, Addison disease and pernicious anemia.1,2

There are two mechanisms involved in ocular changes seen in Graves disease. First, the sympathetic state leads to increased tone in the levator palpebrae superioris, thus causing lid retraction and a "staring" gaze. This is seen in other hyperthyroid conditions such as toxic multinodular goiter or toxic adenoma. Secondly, unique to Graves disease, there is an infiltrative opthalmopathy due to an increased infiltrate of lymphocytes in the orbital soft tissues, leading to edema and accumulation of extracellular matrical components. These changes increase the volume of the eyeball and push the globe forward. Eventually, the ocular muscles undergo fibrosis. It is posited that TSH-receptors in orbital fibroblasts underlies the basis of this immune attack on the orbit.1

A similar sequence events leads to the infiltrative dermopathy seen in Graves. Lymphocytes infiltrate into the dermis (where dermal fibroblasts are theorized to express antigens similar to TSH receptors). This infiltration leads to swelling and deposition of extracellular matrical components such as glycosaminoglycans. Often this is seen in the pretibial regions, and thus is known as "pretibial myxedema".

As with many autoimmune diseases, there is a familial inherited component and susceptibility is associated with haplotypes HLA-B8 and DR3. Serology will demonstrate antibodies against thyroid peroxisomes and thyroglobulin, however, it is the autoantibody to the TSH receptor that plays a central in pathogenesis of this disease. Note that there are several flavors of TSH receptor antibodies (TSI, TGI and TBII), and their effect will depend on which epitope of the TSH receptor the auto-antibodies are directed towards.

Women are more likely to be affected (F:M ratio is 7:1) with a peak incidence is between 20 and 40 years of age.

Radioiodine ablation, propylthiouracil (PTU) and surgical excision of thyroid are all possible intervention. It is important to keep in mind that depending on the pre-treatment, the thyroidectomy specimen you receive may have altered histology. For example, treatment with iodine will lead to involution of the follicular epithelium , thus the epithelial cells become cuboidal rather than columnar. On the other hand, treatment with PTU leads to epithelial hyperplasia as TSH levels are increased (due to negative feedback).