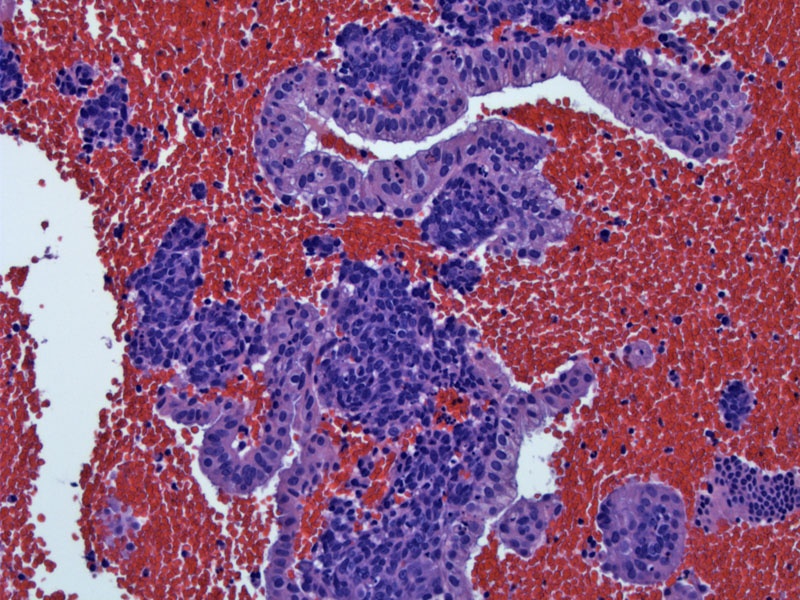 Another image demonstrating strips of surface epithelium and stromal condensation. Residual predecidualized stroma can be seen.

A neutrophilic infiltrate is seen throughout the crumbling hemorrhagic stroma.

A fibrin thrombus (bottom right) is seen, as well as eosinophilic clusters of glandular cells, against a background of fibrin and neutrophils.

Convoluted glands, some with apical mucin and some demonstrating secretory exhaustion, indicate that this is a menstrual phase of an ovulatory cycle.

Another image of stromal condensation, fibrin thrombi and neutrophilic infiltrate in a crumbling hemorrhagic stroma.

If the ovum is not fertilized by postovulatory day 10 (day 24 of the cycle), the corpus luteum involutes and the level of progesterone drops dramatically. The late secretory phase transitions to the menstrual phase. Glandular and stromal breakdown affects the entire functionalis layer by day 28. Features of menstrual endometrium include: (1) fibrin thrombi in small vessels; (2) condensed compact balls of stroma (so-called 'blue balls', yes indeed); (3) necrotic debris and accompanying neutrophilic infiltrate.

It is important to note that true menstrual phase occurs only in ovulatory cycles. Anovulation can also cause breakdown of endometrium and bleeding, however, this is not true menstruation. Distinguishing between the two scenarios is often not possible histologically because endometrial breakdown often severely distorts the glandular and stromal architecture. If glands demonstrating secretory exhaustion (minimal apical cytoplasm and a delicate appearance to the glands) are identified, one can surmise that ovulation has occurred. However, most authors agree that evaluation of glandular and stromal development is not ideal during the menstrual phase.1,2

Extensive breakdown can lead to artifactual crowding of glands and raise the specter of endometrial hyperplasia and even carcinoma. However, other features such as background bleeding, remnants of secretory glands and predecidualized stroma and neutrophilic infiltrate should give the overall picture of menstruation. Furthermore, hyperplasia and carcinoma rarely exhibit the degree of breakdown seen in menstrual endometrium.2