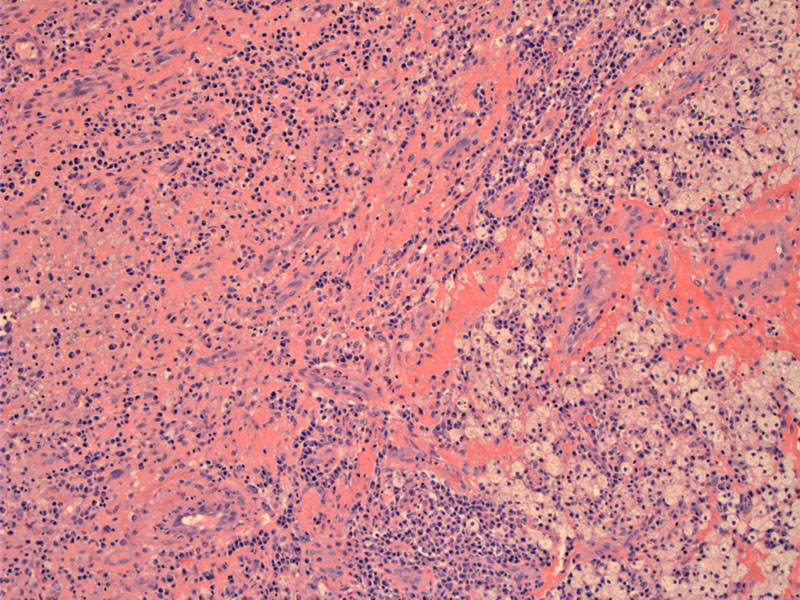 Fibrinous inflammatory lesion with foamy macrophages can be seen in this section of soft tissue.

PAS stain highlights the organisms with a surrounding Splendore Hoeppli phenomenon (esoinosphilic deposits of immunoglobulin and debris that radiate outward in a star-like pattern).

Tropical eumycetoma is frequently caused by the fungus Madurella mycetomatis. It results in a chronic granulomatous infection. The first description of a case of mycetoma is usually attributed to Dr John Gill who reported “Madura foot” in a dispensary report of the Madras Medical Service of the British Army in India, in 1842 (Rippon). It is endemic in tropical and subtropical regions and Africa has the highest prevalence.

Mycetoma is a general term used to describe granulomatous infection of soft tissues that can involve bone. These tumor-like infections have characteristic grains (aggregates of organisms) that drain through sinuses. Mycetoma can be a result of infection by actinomycetes (actinomycetoma) or true fungi (eumycetoma). In the latter category, the causative organisms include a long list of fungal species, but Madurella is an important member (Ania).

Presents with extensive subcutaneous masses, usually with sinuses draining pus, blood and fungal grains (sclerotia). The disease affects all ages, although disability is most severe in adults who work outdoors. In this particular case, a gentleman in who has a history of working outdoors in dairy farms first presented with a "Madura foot" in his early teens. Fifteen years later, he had a below the knee amputation along with treatment with itraconazole. Now in his 40s, the infection appears to have formed a new mass in his thigh.

Mycetoma can affect all body parts, but usually involves the foot ("Madura foot") since the organism is innoculated when a person walks on contaminated soil. Organisms causing Mycetoma (including Madurella) are rare in the United States, but are endemic in regions of Africa, Mexico and India.

Itraconazole treatment for maduromycosis has a high success and a low recurrence rate. The duration of treatment varies with the severity of infection and overall health of individual patients. Treatment may need to continue for years. Lesions that eventually remain are well-encapsulated and distinctly localized. This renders final surgical treatment a likely option.

Mycetoma infection if untreated, leads to massive lesions, which may necessitate surgical amputation. Lesions that remain after antimicrobial therapy are usually well-encapsulated and distinctly localized. This renders final surgical excision a likely option. The disease can be severely debilitating, especially because most lesions arise in the extremities.