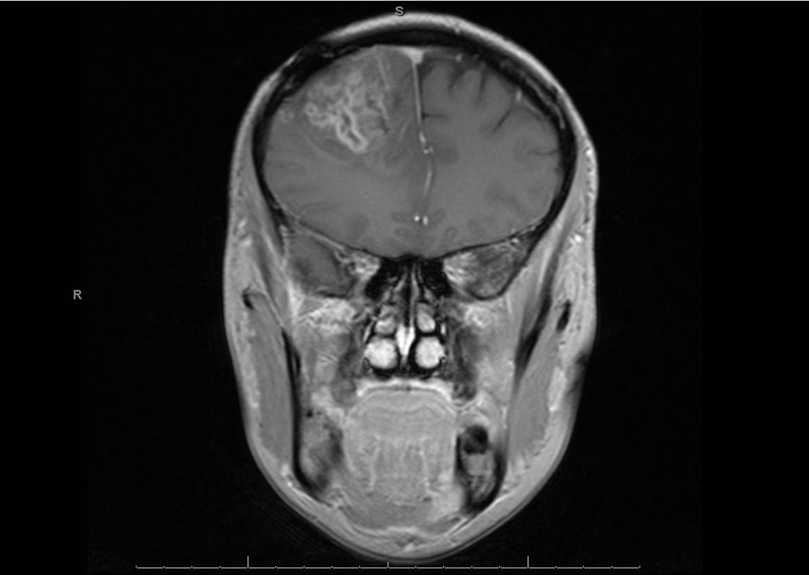 A right frontal lobe lesion can be seen in this MRI.
IMAGE DESCRIPTIONS

A T1 MRI with contrast demonstrates a lesion in the right frontal lobe that extends to the cortex.

The tumor consists of a solid sheet of neoplastic cells with round nuclei -- the nuclei contain finely granular chromatin and small halos. The neoplastic cells resemble normal oligodendrocytes. The background contains a fine delicate vascular network in a

Image of another calcification with a background of increased cellularity. However, no mitotic figures or pleomorphic cells are present to suggest transformation into anaplastic oligodendroglioma.

Another case of oligodendroglioma demonstrating uniform round cells. Note the delicate branching vasculature in the background.

Perinuclear halos are highly characteristic of oligodendrogliomas, leading a 'fried egg' appearance. The perrinuclear halo is an artifact of tissue processing and thus, not seen in frozen sections or smears. Note the delicate granular chromatin pattern with multiple chromatin 'nodes'. In the left lower corner, there is endothelial proliferation -- when robust and combined with pleomorphism, increased cellularity and increased mitotic activity, would suggest a higher grade (anaplastic) oligodendroglioma.

Yet another image where one can appreciate the branching vasculature in the background.

In a dual color fluorescence in situ hybridization (FISH) assay, the presence of two green signals and two red signals would indicate a normal cell with two copies of each targeted allele.

This FISH assay of an oligodendroglioma demonstrates a loss of a red signal in many of the cells. In this assay, the red probes = 19q and thus, indicates a 19q deletion. Note that the loss of both 1p and 19q predicts an extremely favorable response to PCV chemotherapy.

Most masses are located in the frontal lobe, with a minority in the parietal and temporal lobes. This tumor often extends to the cortex, thus, seizures are a common presenting symptom. Grossly, the mass is soft, gelatinous with cystic, focal hemorrhage and gritty calcifications.

Mini-gemistocytes may occasionally be seen -- they are oligodendrocytes with small eccentric inclusions of eosinophilic material. Calcifications (microscopic foci to massive depositions) are found in up to 90% of these tumors. Considered to be WHO grade II lesions, mitotic activity is low and difficult to detect (labeling indices are low).1

The most common genetic aberration in oligodendrogliomas are the loss of heterozygosity for chromosomes 1p and 19q. As the tumor progresses to anaplastic oligodendroglioma, additional genetic hits accumulate. Cytogenetic assays are routinely used to plan treatment. For example, tumors with a loss of 1p and 19q (but without other abnormalities) demonstrate an excellent response to chemotherapy and radiation. Those that do not have this genetic profile appear refractory to these chemoradiation.1-3 Other cytogenetic parameters include amplication of EGFR and loss of PTEN gene, both of which are unfavorable and also suggest the possibility of an astrocytic, rather than oligodendroglial origin.4

Commonly affects young and middle-aged adults (peak incidence between age 35-45) and is very rare in children. There is only a slight male predilection is some studies. Clinical presentation may vary depending on locataion of tumor, but increased intracranial pressure and seizures are common symptoms.1,4