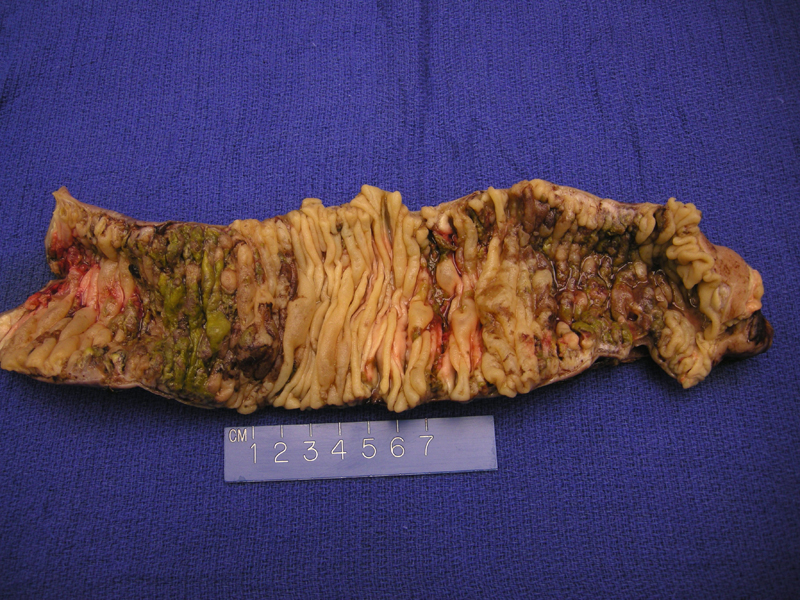 Segmental skip lesions affecting the jejunum are seen upon resection of the jejunum.

Note the hemorrhagic exudative lesions in the jejunum. Pneumatosis (gas entrapped in bowel wall) is also characteristic, but was not prominent in this case.

On cross section, one can appreciate marked edema and submucosal hemorrhage.

The mucosa has under surface fibrinopurulent alteration with underlying edem, which bears a resemblance to Clostrium difficile pseudomembranous colitis.

The villi undergo fibrinoid necrosis, taking on a hypocellular pink appearance, with an underlying inflammatory exudate rich in neutrophils. Note the fuzzy purple rim visible along the villi.

Hemorrhage and a vigorous infiltrate has obscured any recognizable small bowel epithelium.

Edema, fibrin, inflammation and hemorrhage create a picture of severe damage to the bowel wall.

Yet another image of profound submucosal edema. Some recognizable small bowel mucosa is seen on the left.

A mushroom shaped lesion and ghost-like ischemic changes to the mucosa can be seen. There is relatively sparse inflammation and prominent submucosal hemorrhage. Note the resemblance to the other Clostridial organism, C. difficile.

The history of enteritis necroticans is quite interesting. It was originally recognized post WWII in Germany. After chronically malnourished citizens ate large meals of meat and potatoes, they developed abdominal pain and eventually, bowel necrosis. The Germans called this condition Darmbrand for 'burnt' intestines. During the 1960s in Papua New Guinea, children and young adults presented with similar symptoms after participating in ceremonial feasts of pig and sweet potatoes. This disease was called pigbel which is the local term for abdominal pain after eating a pig.1,2

The culprit organism is Clostridum perfringens type C. Note that this organisim has 5 major subtypes based on the toxins they produce. Type C elaborates a beta toxin, which leads to epithelial destruction in the bowel. Of course, many people ingest incompletely cooked pork and do not develop pigbel, thus, other factors are at play. In malnourished persons, they have reduced gut motility as well as reduced levels of trypsin (a protein which can degrade the beta toxin). Interestingly, sweet potatoes contain natural trypsin inhibitors, which is probably why a feast of poorly cooked pork and sweet potatoes in malnourished Papua New Guineans was the kiss of death for many.1,2

After the discovery of C. perfringens type C as the causative organism for pigbel, a vaccination program against this beta toxin has dramatically reduced the incidence of pigbel in Papua New Guinea. In the United States, pigbel has only been reported in a handful of immunocompromised (mostly diabetic) patients who have a history of consuming meat products such as chitterlings (pig intestines) or sausages.1, Clostridium perfringens type A has been reported as several instances of previously healthy adults who developed necrotizing enterocolitis with similar features to pigbel, although in these adults, the colon (not jejunum) was affected.3

Presenting symptoms include abdominal pain, abdominal distention, diarrhea and hypotension. The patient can rapidly progress to obtundation and death as the bowel becomes necrotic. On imaging, dilated and thickened loops of small bowel are found. On laparotomy or autopsy, there are necrotic segments separated by stretches of normal jejunum.

Patients at risk are those who are protein-deficient and malnourished.