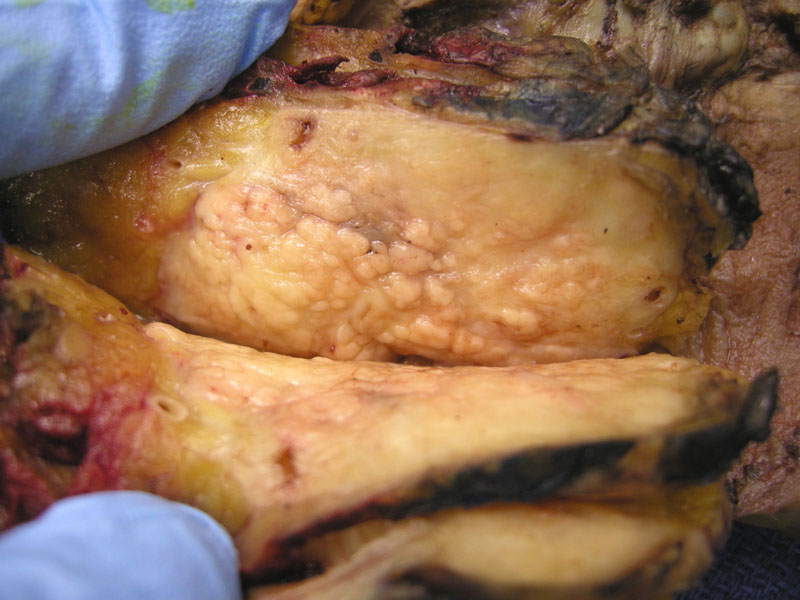 The pancreas is diffusely enlarged, fibrotic and nodular.
IMAGE DESCRIPTIONS

Grossly, the pancreas is diffusely enlarged and fibrotic with a nodular appearance.

Lymphoplasmacytic infiltrate is seen in the surrounding medium and involving a large interlobular duct.

Another image of the key histologic features: sclerotic stroma and lymphoplasmacytic infiltration of the pancreatic ducts.

Regarding the first subtype, AIP may be a manifestation of the broader systemic IgG4-related sclerosing disease (Detlefsen). We will not go into the details of IgG4-related sclerosing disease, other than it is now considered a lymphoproliferative disorder (IgG4-positive multiorgan lymphoproliferative disorder) with IgG4 hypergammaglobulinemia and IgG4-positive plasma cell infiltration and encompasses other entities such as Mikulicz's disease and mediastinal fibrosis. AIP is an evolving hot topic (Novotny).

Presents with symptoms of chronic pancreatitis such as intermittent or progressive jaundice, mild epigastric pain or discomfort, and weight loss. Autoimmune stigmata may be present, such as Sjogren's syndrome, rheumatoid arthritis, and primary sclerosing cholangitis. Patients may have high IgG4 levels and elaborate autoantibodieis such as RF and ANA.

CT imaging is helpful to establish the diagnosis, as the feature include: (1) diffuse swelling of the pancreas; (2) a capsule-like smooth rim of low density surrounding the pancreas (3) absence of pancreatic calcification and intraductal stones and (4) delayed enhancement of pancreatic parenchyma. The hallmark findings on endoscopic retrograde cholangiopancreatography are focal, segmental, or diffuse narrowing of the main pancreatic duct.

Prednisone is initiated at a dose of 0.4-0.6 mg/kg per day for several months. Most patients are treated for 2-3 months, and then tapering begins. Eventually, prednisone is able to be discontinued or maintained at a dose of 2.5-10 mg/d.

AIP is a form of chronic pancreatitis that may be reversible with steroid administration.

AIP may be a pancreatic manifestation of IgG4-related sclerosing diseases, a type of lymphoproliferative disorder with IgG4-plasma cell infiltration and multiorgan involvement.