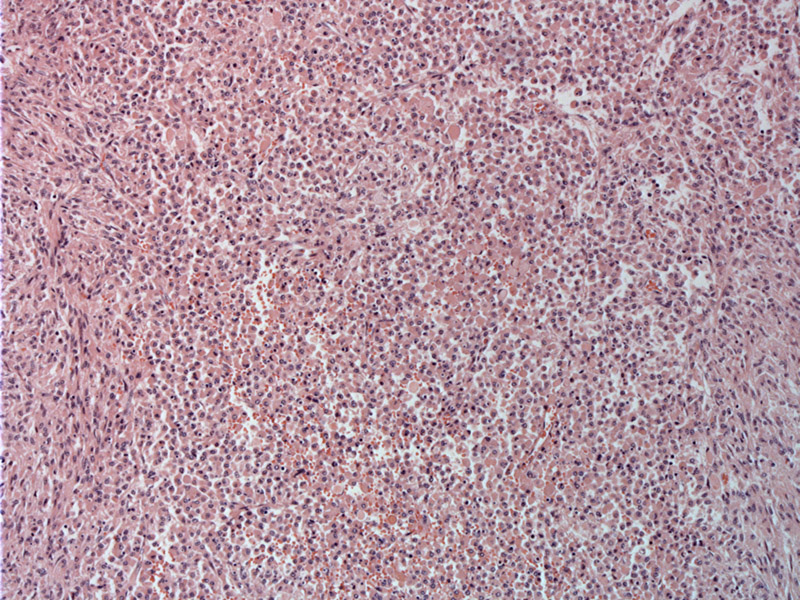 Sheets of histiocytes with abundant pink cytoplasm involve the lung parenchyma (usually in the upper lobes).

Numerous Michaelis-Gutman bodies are present, only a few of which are noted with the arrows. MG bodies represent calcified phagolysosomes with a target-like appearance. Intracytoplasmic MG bodies are pathognomonic and must be present for a a definitive diagnosis of malakoplakia. They can be stained with Gomori methenamine silver, periodic acid –Schiff and Prussian blue stain, and best results are obtained with von Kossa stain.

Malakoplakia literally translates to "soft plaque" and refers to the gross appearance of the lesion. This entity represents an uncommon histiocytic reaction to infection. Occurrence in the lung is even more unusual than its favored sites of involvement which include the GU, GI and genital tracts. Reported cases of pulmonary involvement have been seen in association with Rhodococcus equi infection, with one case related to Pasteurella multocida (Bastas). Most cases arise in patients with AIDS or other immunocompromised conditions.

Microscopically, the key distinguishing feature are Michaelis-Gutmann bodies which are rounded, concentrically layered intracytoplasmic inclusions. Interestingly, fragments of bacteria can be found within these bodies and may act as a 'nidus' for calcification (Zander). These inclusions are PAS positive.

May present acutely, with high fever, dyspnea, purulent sputum, or in an indolent fashion, with fever, cough and weight loss. Usually, the upper lobes are affected, and empyema is common. A solitary cavitary mass or upper lobe consolidation may be seen on X-ray.

Treatment includes erythromycin, vancomycin, and clindomycin to treat the Rhodococcus.