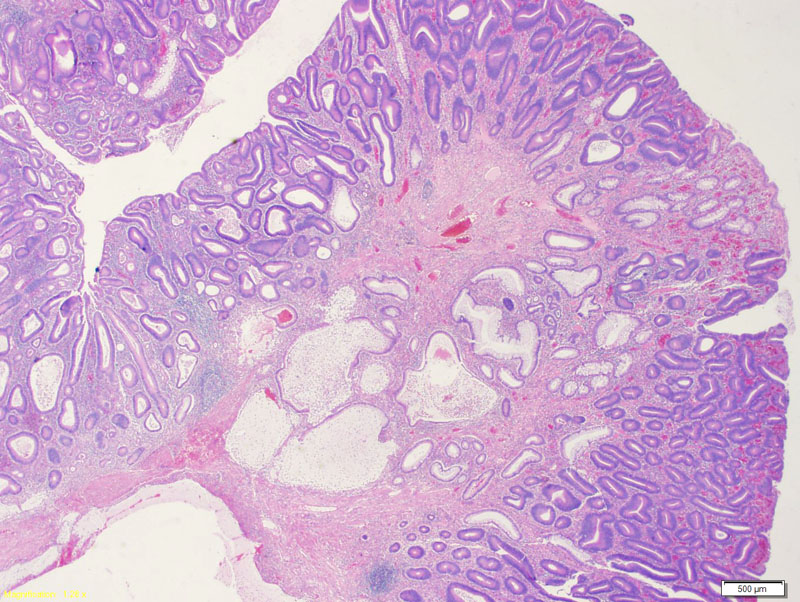 The middle of the image shows some herniating glands protruding into the fibrous stroma. This finding is a result of mechanical glandular prolapse into the stalk.

On higher power one appreciates that they look the same as the adjacent epithelium, which is clearly non-invasive. Helpful criteria for pseudoinvasion include: 1. lack of cytological atypia, 2. hemosiderin deposition, and 3. deep mucinous cysts. Lobular growth is also helpful when present.

The adenomatous glands are only partially intact and partially ruptured, and the stroma is consistent with the usual lamina propria

Again, there is a partially intact cystically dilated gland with abundant mucin and a larger mucin filled cystic area. Note the lack of atypia.

The stroma is not desmoplastic, a helpful feature.s

This is a different case in which some cystically dilated gland (right) are present, and there is stromal hemosiderin (bottom). Hemosiderin is yet another useful feature.

By contrast, this polyp shows glands residing in the stroma, but this represents true invasion in this polyp.

Pseudoinvasion in a colorectal polyp results from peristalsis and subsequent twisting of the stalk. This causes herniation of epithelium into the underlying stalk stroma. Polyps arising in the setting of Peutz-Jegher syndrome are particularly prone to pseudoinvasion. Recognition is important in order to avoid the erroneous diagnosis of invasive adenocarcinoma.

Sometimes there is a thick, bulging stalk noticed by the endoscopist. This finding is more often seen in polyps excised from the left colon, and particularly the sigmoid.